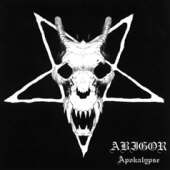 The title, the visual design, the fact that the six songs were “produced and mixed in a few hours” – Abigor obviously felt the urge to release an output which was stripped down to the essentials. In particular Nachthymnen (From the Twilight Kingdom) had an opulent aura, now came the turnaround. Guitars, drums, vocals and a bass guitar which is hardly audible, that’s it. Compared with the multi-layered songs of outputs like Verwüstung / Invoke the Dark Age, the here presented Apokalypse kneels in the morass of primitiveness. Sophistication, elegance, intelligence; all of them are conspicuous by their absence. And the hollow production exactly reflects the excessive studio session… the material sounds as cheap as an old demo, the drums have a mechanical touch and the vocals with a lot of reverb on it do not reach an over-average level.

After their first works I was clear that Abigor stand for black metal, but I thought they represent another form of this multi-faceted subgenre. Here they have disguised themselves as Norwegian newcomers, but, unfortunately, very incompetent beginners who cannot create an ice-cold surrounding. The tracks are acceptable to a certain degree, but they are totally expressionless. Nothing keeps sticking in the ears, there are no memorable guitar parts and only every now and then a morbid atmosphere shimmers through the guitar work, for example in the first part of “Hyperwelt”, a song that suffers from its powerless break after roughly 90 seconds. It’s surely difficult to pen complex tracks, but it is not easy to write totally exposed pieces as well. With regard to the latter discipline, Abigor fail here.

Blast beats parts, a constantly diabolic yet monotonous voice and rasping guitar leads are not enough to create the typical vibes of black metal. Apokalypse lacks individuality. It holds vehement and brutal sounds that do not spread the slightest aura. Moreover, the entire approach does not convey a feeling of authenticity and that’s a cardinal sin in terms of black metal, at least from my point of view. Usually I am the last one who spits on straight and simple pieces, but here the music leaves a stale aftertaste. The songs are interchangeable, one-dimensional, almost robotic and therefore they lack diabolic vibrations. A little bit more thoroughness would have been necessary, but too much attention for the songwriting was obviously incompatible with the concept of Apokalypse. Forgive me, but I will forget this release again “in a few hours” - or even faster.