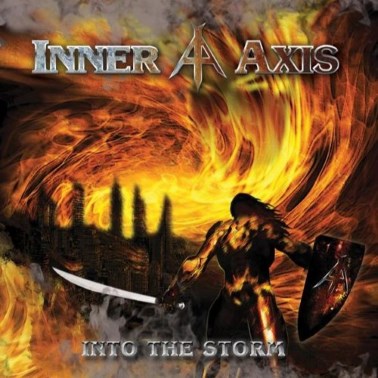 With the splintering of metal into many sub-genres and then furthering into subs of those subs, I end up finding myself longing for some of the straight ahead styles of classic metal. Sometimes I just need to listen to nothing complicated, just heavy music that was simple, yet still holds that draw for the heavy. I was in one of those moods when Germany's Inner Axis came to me... and returned me to my musical past.

Mixing a dizzying array of styles into one lurking and enjoyable entity Inner Axis combines Iron Maiden, Helloween and a whole heaping of older Thrash elements to create something that is very familiar, yet very original both musically and lyrically. It is almost as if 80's NWOBHM and late 80's Thrash had made a frank-en-baby and they are at the terrible two stage - defiant as hell.

Tracks like the unforgettable 'Riders Of The Mists' raises my beer in the air, then the brutal thrashing of 'Soultaker' shows me a band that has so much in the way of talent and yet retains a certain level of that basic rawness that many of the more technical bands loose. It is that, and the sheer power of the music itself that makes Inner Axis better than most... and will appeal to a wide part of the metal world.

I would have to say that this German band has become a normal fixture on my stereo already, and I find myself telling everyone I know about this band. These guys just simply rocks, and that is just not lip service. Inner Axis may not be anything new musically. They just are a good band, putting their stamp on the music world with the metal they love. Can you ask for anything else from a band? I say no!