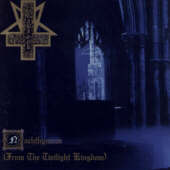 Nachthymnen (From the Twilight Kingdom) - such a title sets the bar high for the content. Okay, Abigor had proven their skills two times before and therefore I was ready for their triumphant next strike. I expected nothing less than an album that showed the Scandinavians the next dimension of black metal. This was surely wrong – anyhow, there is still a disturbed relationship between this album and me.

The production is pretty comparable with that of the first outputs. This means it is relatively thin and it spreads the aroma of the underground. For example, the drums still lack vigor and power. This is okay for the output of a newcomer, but I thought Abigor intended to take the next step with a new album. Probably I was wrong again. In view of this situation, it’s only the re-occurring timpani that introduces a remarkable percussive element from time to time. The guitars also do not create a voluminous sound and so it’s almost only the demonic nagging of the lead vocalist that fulfils the expectations.

It’s the connection of this production and the somewhat idiosyncratic, almost avant-garde song-writing that brings the album down. The musicians doubtlessly have a clear vision and they follow it, no matter where they end. Acoustic breaks and (sometimes pretty inadequate) female vocals do not shape the full-length, but they cannot be ignored as well. Not to mention the several tempo changes. Given this more or less experimental approach, Abigor are losing sight of the whole picture. In other words, the enormous artistic ambitions do not result in great tunes. Exceptions like “The Dark Kiss” confirm the norm, but even the album’s best tracks (I don’t want to speak of “highlights”) cannot successfully challenge the outstanding pieces of the first releases. The Austrians also forgot the old rule that the first pieces have to draw the listener into the album. Especially the opener “Unleashed Axe-Age” lacks intensity and dynamic. In contrast, the second half of the album holds more furious parts. Here Abigor pay tribute to the fact that black metal was not invented in order to play overly melodic tunes and maybe that’s the reason why they find a better mix between melody and brutality on tracks like “I Face the Eternal Winter”. By the way, this song really does reflect a quite grim coldness.

In my humble opinion, Nachthymnen (From the Twilight Kingdom) (by the way, is it artwork the black metal answer to Krokus’ “One Vice at a Time”?) was, is and will always be a pretty ambivalent album. Some songs commute between fantastic, dramatic parts and totally ordinary sequences in a matter of seconds. Too many ideas and no coherent concept, as much as I regret it. The talent of the guys is out of doubt, but talent alone is not enough. Given this situation, it comes as no surprise that the magical moments of Verwüstung… and Orkblut… do not re-appear. Nachthymnen…, that much is clear for me, could not keep what its title had promised.