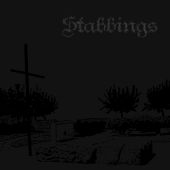 Type:
Release Date: 2010
Label: Hipster Death
Genre: Gothic
1 Kill Me
2 It Would Not Be Enough

Seattle based Stabbings is self proclaimed Goth/Horror Rock outfit, with metallic leanings but that is not what I heard once in my player. Noisy, unrefined and not even close to being talented or even organized. The band is less about music and more like listening to septic tank gurgling before it breaks down.

With some of the worst muddy sounding recording, the most terrible songwriting and a complete lack of musical talent I have had the un-pleasure of finding, listing to the two songs on the album makes me shake my head. There are some minor spots that seem to hint something better than what is on the disk but the reality kicks you in the ass.

Because there are only two songs on this disk, I felt so damned lucky that it did. With music this bad, I was considering reviewing Polka albums or simply making the decision to start ‘stabbing’ my eardrums out with a icepick. It was an experience that I would never want to have. I would rather have a colon check done by a sadistic mass murderer than to listen to this very short EP ever again.

I now go and put the CD containing Stabbings songs in the dumpster and hope that it is not like the cat and it comes back the very next day. If it does, I would consider the job of Polka reviewer the instant I saw the album again. This is not even good for skeet shooting, as a toy for a dog. It is just that bad.