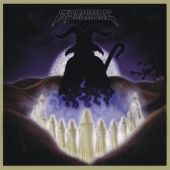 Type: Full-Length
Release Date: 2008
Label: Unknown
Genre: Heavy
1 In The Darkness
2 Witches Sabbath
3 Kathedral
4 Beyond Is Where I Learn
5 7th Ghost
6 Faceless Mistress
7 Temple Of The Unknown
8 The Monolith

This is a classic sounding Heavy Metal album in the Mercyful Fate style. There are operatic vocals present with this band that actually do a good job dealing with the King Diamond-like registers. This is actually my second exposure to the band and it’s another solid appearance after already hearing the great "The World. The Flesh. The Devil".

There are a number of great old school riff patterns to be found here, right from the excellent opening number 'In The Darkness'. The music never slows past a nice mid-pace which also manages to keep the energy registers flowing. There are some devilish imagery traits to be found in the lyrics, but also even in only the guitar tone itself. This element of being likened to evil deities is done better here than what a band like Ghost does, in my opinion. The riffs keep coming with more and more levels of goodness to them. The entire album is atmospheric in a chilling way, which helps maintain the mood the band is aiming at. The band still loses a bit of steam compared to the classic Mercyful Fate material because the songs here aren’t quite as memorable as those of "Melissa" or "Don’t Break The Oath". Regardless, there is a lot of music to enjoy here and enough variety in the chrous’ and verse lines to keep you coming back for more. In Solitude had a winner with their self-titled album, but it also recommended to check up on the sequel release, which is very good too.

There aren’t many bands that can play the classic stuff well these days and this is certainly one of them. Very enjoyable and listenable stuff is to be found on the self-titled album.