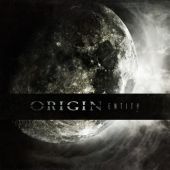 First arriving on the scene in 1998 with the appropriately titled A Coming Into Existence demo, then finally exploding with their self-titled debut two years later, Origin are band who have been progressing ever since. With slow, even steps, they’ve come to where they are today, and have mastered their art of sonic insanity.

While all previous albums are technically brilliant, it seems like Origin have made a conscious effort after III to focus more on songwriting than on brute chaos. Antithesis had the perfect balance of absolute madness recorded to tape, and memorable riffs. So, what do the boys have to offer this time around?

What we have here is an extremely focused and determined Origin. Not to say that they weren’t before, but this time around, thanks to the mix as well, everything sounds amazing. All of those crazy riffs at hyper speed, the incredible drum work, and even the bass can be heard loud and clear. And the fact that they recorded this to tape is just a slap in the face to every other tech death band out there. In short, Origin can play better than you. Not only are they more technically advanced than say, just about any other band, but they have the songs to back it up as well.

“Expulsion of Fury” launched with an intro that is just maddening. It’s a thing of beauty, and a perfect way to start the album. No long intros from some dumb, obscure horror movie from the 60’s or any of that nonsense. Straight for the throat. And they don’t let go. The section at 2:04 sounds completely alien and fascinating – but Origin have always been that way. When Jon kicks in with his offset drumming, and keeps adding layers upon layers to his blasts, it’s just a sincere “holy shit” kind of moment.

The album boasts some true riffing madness. There’s stuff in here which will humble many guitar players - take the rapid-fire riffing in “Purgatory”, “Swarm”, “Fornever” and “Consequence of Solution.” It’s just much more powerful on this record because everything can be heard clearly, and I was very impressed with how the drum sound. That was my only gripe about Antithesis, is that the drums sounded like absolute shit, even though Jon was the boss behind the kit. Here, he caves your chest in with the sheer impact of his playing.

But like I mentioned before, none of this would matter if the band couldn’t write some decent songs. Which brings me to my favorite track on the album, “Saligia.” Here, everything the band has done up to this point, what I believe what Origin stands for, shines through. Awesome technicality, memorable riffs, superb drumming and bass playing, and an interesting arrangement make this the highlight of the album for me. The drumming on the intro is a treat; you gotta love those bursts of double bass Jon throws in, just because. The section at 1:16 is probably the best and most memorable on the entire record – it just slays. Clocking in at nearly 7 minutes, this track is just packed with fantastic moments, especially Paul’s stunning guitar solo.

One thing worth noting is that all vocal duties were handled by Paul and Mike (a fact oblivious to the review right below this), and they did a fantastic job in my opinion. James Lee left some damn big shoes to fill, but I think Paul and Mike really stepped up to the plate, did what needed to be done, and did it so well that it doesn’t bother me at all. In fact, I doubt it would bother any Origin fan, period.

I’d also like to personally tip my hat to Paul Ryan for his outstanding work on this record. I simply love the Eastern influences in his playing. While not too obvious like say, Nile would be about it, it’s definitely there if you listen for it. And the fact that he recorded all this madness to tape makes me respect him even more. Trust me… it’s an extremely difficult thing to do. Especially on songs like this, you’d have to be out of your goddamn mind to even think of attempting it. But it’s been done, and it’s the best sounding Origin record there is.

In conclusion, this is one hell of an album. Not a dull moment to be found anywhere, and it twists and turns unexpectedly, yet flows so well. A definite must for Origin fans, and another definite must for anyone into technical metal. This shit will blow your face off… and you’ll love every blistering second of it.