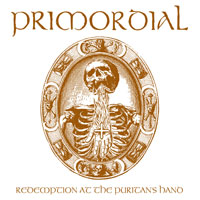 The amount of passion that is put into the emotion of Primordial’s music is what elevates them above and beyond most heavy metal music. The abundance of quality material on their new album, "Redemption At The Puritan’s Hand", makes it an absolute gem any fan with an open mind for metal should check out.

There are many quality tracks here. 'Bloodied Yet Unbowed' is absolutely the centerpiece of the work and has a way of sucking you into the deep mood that is created. I like it more than any other Primordial song to this point in time. Other songs like 'Lain With The Wolf' and 'Death Of The Gods' are excellent too. The only weaker tracks are 'Gods Old Snake' and 'The Black Hundred', which are merely good, but not at the level of the rest. Taken as a whole though, everything melds together really well and has more peaks and valley than any other Primordial album. The band makes one get caught up in the feeling of the music and though the musical performances are spot on, the band is able to make their mark with a relatively straightforward palette.

There are a couple of elements that really stand out and make this album as outstanding as it is. The vocals of A.A. Nemtheanga have improved to a point where they are nearly the best you’ll ever hear in any type of music. The drumming has also been raised to a notch above prior releases, with tight playing and superb fills.

"The Gathering Wilderness" and "To The Nameless Dead" are still excellent albums and "Spirit The Earth Aflame" is no slouch in itself, but the music of Primordial has developed to a pristine peak on "Redemption At The Puritan’s Hand". The bar has been set for Heavy Metal in 2011 and it will take a brave contender to surpass what Primordial has done here.