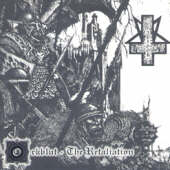 Early Abigor had a weakness for bilingually titled outputs and sometimes this kind of acceptable duplicity was reflected in their musical approach as well. Orkblut – The Retaliation combines Summoning-compatible interludes with pretty puristic stuff. Of course, the parallels to the masters of Austrian epic black metal are by no means just a matter of chance. Silenius was omnipresent at the mid-nineties. Pazuzu, Die Verbannten Kinder Evas and, of course, Abigor and Summoning were his manifold fields of activity. But Orkblut… is not mainly shaped by the monumental keyboard lines that became the trademark of Summoning after their halfway metallic debut. The EP with the almost hardcore-compatible technical data (eleven songs in less than 25 minutes) outlines the pristine understanding of black metal. There is an extreme misanthropic momentum in the art of Abigor which is also mirrored by the totally anti-commercial sound. The production generates a nebulous aura. Do not expect powerful drums or a clearly defined overall appearance, but a mix that fits the music very well. Moreover, the nagging of the lead vocalist expresses this kind of well-considered hatred that lends the music the final diabolical touch.

The occult atmosphere of Orkblut… is ignited by dark melodies (enjoy the central part of “Bloodsoaked Overture”) that surprisingly combine almost soft tones with a proper background blackness. The timpani at the beginning of the first “complete” song, the programmatically titled “The Rising of Our Tribe”, builds a bridge to “Verwüstung / Invoke the Dark Age” from 1994, but it’s not only this instrument that reminds the listener of the preceding full-length. Orkblut… shows the band on the same evolution level as Verwüstung… without – almost needless to say - any signs of lame stagnation. The Austrian trio handles the different colors of its sound masterfully and so the rather shy parts and the wicked sequences form a really astonishing, monolithic unit. Orkblut… is one of these releases that make one thing very clear. It does not always need extreme vehemence in order to unleash the forces of evil. In terms of black metal, true and authentic spirituality is of higher importance, even though a robust musical basic structure is of very high relevance as well. Combining both leads to songs like “The Soft and Last Sleep”, where a dreamy keyboard break is extremely well embedded into its sinister and vigorous surrounding.

Just like Verwüstung…, the here reviewed EP, full-length or whatever is a trip back in time. A time, when my first love called thrash metal was in a comatose state. A time, when the ambivalent evolution of black metal, the mutation from a fascinating underground phenomenon to a mass movement of partly incompetent fools and hobby-Crowleys, had not yet begun. And honestly speaking, the later evolution of Abigor also did not make me happy. But that’s another story. So, let’s enjoy Orkblut… with its mostly great compositions and its genuine feeling without a tear in the eye.