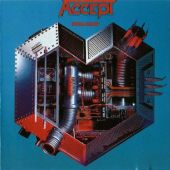 Type: Full-Length
Release Date: 1985
Label: CBR Records
Genre: Heavy
1 Metal Heart
2 Midnight Mover
3 Up To The Limit
4 Wrong Is Right
5 Screaming For A Love-Bite
6 Too High To Get It Right
7 Dogs On Leads
8 Teach Us To Survive
9 Living For Tonite
10 Bound To Fail

I was so happy when I got the call to review a timeless metal classic Accept -"Metal Heart". I remember this album so well, but have to admit that it had been more than just a few years since I listened to it. One of my favorite albums of all times was their earlier release of 1983's "Balls To The Wall" album, one I wore out on cassette tape many times (I am old, LOL).... and I was happy to trip down memory lane.

Germany has had made so many good metal bands come over to our North America shores - some of which have influenced me greatly. None more than Accept (and death pioneers Destruction) has fired my need for good metal over my career. With a mixture of that all important power, great hooks and all of those timeless melodies that don’t compromise on using memorable heavy riffing, Accept showed that you can have commercial success without selling out.

I have to say that there are so many good tracks to talk about here, but their were those precious few that jumped to mind. 'Midnight Mover' and the title track are the main songs that show how good the band was back then... and that makes me nostalgic to hear more of it, to say the least. The others songs were good, but there was just something about these two that made them stand out.

The production was so slick on this album, that some of Accept’s glorious growling power had been lost but despite that little glitch - this was an album that any newer metalhead should hear and the seasoned veterans of the metallic life need to hear all over again. It is just that type of album. I call it classic.