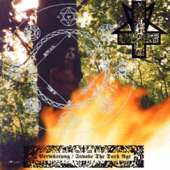 The initial spirit of the so-called second wave of black metal has nothing loss of its fascination during the last decades. Of course, it is long gone, but a handful of bands were able to catch it on their debuts and to preserve it. Abigor's first album belongs to this precious works. The trio from Austria did not play typical black metal, but exactly the individual approach shows the artistic liberty during the early days. These free minds did not think about self-limitation, but they also did not think about the intentional mixing of styles that do not belong together.

Abigor's debut consists of atmospheric sections with almost dreamful guitars, medieval chants and, of course, a lot of harsh, cruel and sometimes icy black metal. The album suffers from its poor production that lacks pressure and vigor - or is this mix rather part of its charm? Verwüstung / Invoke the Dark Age does not sound perfect, that's true, but it expresses all the mental pain of its creators in a fascinating manner. "Kingdom of Darkness" constitutes the first song which bundles all strengths of the band and its eight minutes pass in a flash. This track emphasizes impressively that one can spit on conventional song patterns without creating inaccessible, overly complex or progressive pieces. The band has enough creativity to connect its dark force with melodic sequences which hit the target. "Eye to Eye at Armageddon" is another highlight that features the multi-layered competences of the band, although the timpani’s of "Kingdom of Darkness" do not reappear here. That's a pity, because they work as a link to the first wave of the sub-genre, namely Celtic Frost...

...but they show up again in the beginning and in later sequences of "My Soft Vision in Blood" and add their typical majestic touch. This slow-moving song also belongs to my personal favorites. It drags on and on in an almost painful manner, just like a dying creature on its last meters. Its great ending with a soft melody appears as the savior of the track, it's simply intriguingly executed. And that's not all, the then still pretty original combination of an ultra-raw voice and a non-metallic, melodic instrumentation gives the first section of "Weeping Midwintertears" a very special note. No doubt, this band saw no boundaries during the recordings, nevertheless, the dudes never betrayed the spirit of the sub-genre. Quite the opposite, Verwüstung / Invoke the Dark Age can be seen as a pretty spiritual work. This is not to say that it lacks metallic fury. Abigor do not play softball games, they just add various different impulses. Only the two short keyboard numbers are not really necessary. Silenius should have used them for a Summoning album.

Either way, this album has stand the test of time - and that's unfortunately no matter of course when it comes to Abigor. But this full-length tells us a lot about the early days of the second wave and it holds seven good or even outstanding compositions, written by free minds. Only fools would doubt the leading position of Norway in terms of the misanthropic atmosphere that expressed itself in the first works of the bands from the fjords. Nevertheless, some bands from other countries also left their footprint and Abigor was definitely one of them.

One look at the album cover and liner notes will indicate to you that Abigor are in fact black metal. Liner note photos of band members with corpsepaint may make you laugh, but despite this, the music that Abigor has created for this album is a well constructed. “Verwüstung/Invoke The Dark Age” is an underrated atmospheric black metal opus.

This album is what black metal is about. It’s very solid. Not a weak track on here, it seems like a convoy to somewhere, instead of running into the ground. It is constantly progressing as an album. Excellent atmosphere is conveyed here also. It’s dark, mysterious, angry, loud, melodic, etc. The guitar lines are very convincing and well fitting. They are strong and sharp, instead of dull and monotonous. Part of the reason this album is great is because of the bands ability to compose well. They aren’t always stuck at one tempo, know when to bring in new elements, and know when to change the mood to something more satisfying. The tracks and elements of the album distinguish themselves from each other, instead of being an indiscernible blend. Abigor had the right idea when composing this album.

Bottom Line: I don’t know why this band is as underrated as they are. While not completely original, they are not a copy of the rest of the scene. They are a strong unit and beat out many other black metallers with their strong song writing and ideas. This is an excellent place to start if you’ve never heard Abigor before, and it’s a great album to own if you enjoy black metal.