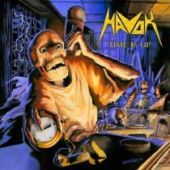 A ghost sneaks through the thrash metal scene. Its perfidious mission is to make actually good music completely emotionless by stealing its soul. Suicidal Angels fall victim to this mean phantom again and again and some people say that Havok are also lost. Well, their last album was maybe no milestone and yes, a certain lack of emotions occurred. Yet the straightforward double bass and the jagged riffing of the programmatically titled opener "Prepare for Attack" shows that Havok once had heart and soul. Here they do not play thrash by the numbers and the equally configured, double bass driven and chorus-crowned "Fatal Intervention" is another well designed kick in the teeth.

Nevertheless, the ghost does its deeds in the background and his diabolic work shimmers through when it comes to songs such as "D.O.A.". Is it a bad song? No. Does it trigger any emotions? Again: no. This is the problem of the less convincing pieces on this album: they pass by more or less smoothly, they do not hurt the flow, but they forget to mark their territory. The consequence is that it takes some time until the opening riff of "Killing Tendencies" draws me back into the full-length. Its Testament-inspired chorus does not score with a really impressive vocal line, but the guitar work during the verses and the bridge ensure a very robust basis. I have mentioned Testament and maybe I should add that Havok play typical US American return-to-the-Bay thrash. Dirty elements are missing, technical precision forms the material. The voice of lead vocalist and guitarist David Sanchez is aligned with this musical approach. He sounds vigorous, but he is never at risk to lose control or to convey some grains of filth. Needless to say, that all is framed by a clear production that avoids inappropriate sounds. No problem, I don't speak of an entirely sterile appearance, but at the same time the mix is not able to lend Havok more individuality. Shitty ghost.

"In this world of efficiency, there's no room for mediocrity". That's not my finding, but Havok surprise with this line. It describes their own problem pretty well, because too many average parts show up after the exciting beginning. "The Cleric", a mid-tempo headbanger, introduces itself with truly mighty guitars, but they get lost as the song progresses. Thank God, at the end they reappear and even a gloomy atmosphere is created by the solos, while the rasping six strings do their work unswervingly. It is getting clear that this band, in particular main composer Sanchez, is too competent to pen worthless tunes, but the here shown form of consensus thrash - the level of harshness can be located between Testament and Exodus - fails to feature special or even unique qualities of the formation. No doubt, Time Is Up has its moments of glory. The two openers remain the best tracks, even though the finishing title track combines pinpoint riffs with accurate drumming. By the way, the double bass of the closer sounds almost mechanized - is this you, Ghost?

Crisp riffs with a solid sense of tempo and crunch highlight this old school influenced Thrash platter. A couple of bands that immediately pop to mind when listening to the disc are Coroner and Kreator, as the music sounds like a combination of the two. The guitar licks are scalpel like in precision and complemented by pristine solos. Musically, this is really solid stuff throughout. It might not appeal to fans of the Bay Area Thrash style as the more aggressive type of Thrash that Kreator perform, however.

The vocals don’t display the more straight ahead singing of the Bay Area scene, but are rather shouted out. This is my least favourite element of the disc because in terms of song-writing and instrumental prowess, the album is about as tight as they come in the Thrash genre. An interesting bridge or solo is always inserted when it seems the music might be dying down slightly. Also, the main riffs in the rhythm section crush. It might not quite be my particular favourite style of Thrash, but there’s no denying the quality of the music on display here. Not a single track on "Time Is Up" isn’t of the highest standard of the Thrash genre. There are plenty of highlights here. Amongst them are 'D.O.A' and especially 'The Cleric'. The latter has some of the most melodic and intricate portions on the entire disc. This album isn’t exactly my style, but I can’t deny the quality to found on this release.

Anyone that’s looking for a Thrash album that is powerful and well-constructed should look no further than this disc. This is great material, but not quite at the level of last year’s "The Evolution Of Chaos" by Heathen or even "Ironbound" by Overkill. It’s still far superior then most Thrash you’ll hear these days by a longshot, however.