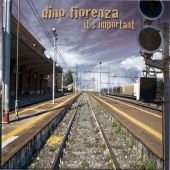 Bass artist truly extraordinary... that is exactly what Dino Fiorenza is. As a bassist myself for most of my career, I was eager to hear what this titanic Italian four string god was unleashing. I nervously put the CD in and started to listen, then I was overwhelmed, then I found myself becoming very underwhelmed.

This man has brought the bass out as a lead instrument, something that was needed but now that he has done it, I am confused. It is amazing, technical and musicallly brilliant - but it bores me to death. For all of the talent and simple brilliance the man has shown, Dino Fiorenza has made a boring album.

As an instrumental album, this is up there in sheer talent. It shows a man that has exceptional talent, as well as a grasp on the very limits of his bass- yet it has not translated over into the music. As skill bending and so amazing as it is, Dino’s album lacks soul and that melodic aspect. Sort of like Yngwie Malmsteen’s first solo album for me. That was an album that was impressive, but soulless... you got bored easily, even though the skills are so damned amazing.

I am disappointed with this record. I see a man that is so amazing, and possibly the top rock Bassist of all time (except for Geddy Lee of Rush fame and the great Cliff Burton), but sometime you can have too much of a good thing - the mainstream Metal/Rock fan would be impressed as well - then be bored by the third track. Sad... but very true.

Musicianship:10
Atmosphere: 7 (overwhelming)
Production: 10
Originality: 7 (it is, but without direction, looses a lot)
Overall: 7