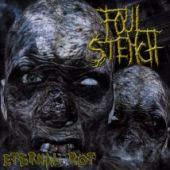 Dayton Ohio is not known a lot for Heavy Metal coming out of its charming fold, little alone unleashing blistering and near nuclear metal on the extreme end of things. I am glad though, that they have the Death Metal outfit known as Foul Stench. Somehow I think that Ohio will never be the same again.

Mixing Death Metal with shadings of 80's Hardcore and Thrash, Foul Stench comes at you with old school extreme metal with a new vitality. Sounding like a bastard spawn of Autopsy, Death meshing with some Black Flag with a little bit of Venom added in, the band ends up coming out being so original sounding despite cannibalizing their influences.

With devilish glee and a tall glass of beer in hand, I tell you about songs like the attacking power of 'Consumed' and the sheer brutality of 'Noose'. With gory lyrics and nasty riffs and a wall of heaviness, Foul Stench seems to perfectly blends their loves of extreme metal and Hardcore into a form that is as tempestuously heavy as it is good. The production end of things could be a whole lot better, even with such an extreme act as this is that usually sound better with a raw recording, but you can’t have everything.

This is a good album, better than the most I have been hearing. Is it a top notch album from start to finish? Not really. What you get on this album is some very good metal, that seems to push the boundries of what is expected yet still stays true to itself in the end. A recipe for a long career, if you ask me. Something sounds foul here... and that is a good thing.