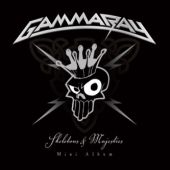 Power Metal is a genre that is misunderstood more often or not. It is wrongly lumped in with Speed and Thrash usually, because the styles are close but Power Metal is a style all of its own. At the apex of the Power Metal field, is a German band born out of a musician’s leaving a successful act to follow what he wanted to do. Gamma Ray is that project that has become so much more.

Gamma Ray was founded by guitarist Kai Hansen after he suddenly left Helloween in the late 1980s, citing that he wanted to control the amount of touring he was doing because of the band heavy scheduling. He found like minded musicians pretty quickly, and this project was born, and the metal world was enriched. With this EP of seven songs, they continue to show that Power Metal is still strong and vibrant and is humourous as well. Gamma Ray, like Kai’s previous band, knows to have fun at times - yet still take making music serious when the time dictates it.

Two tracks stand out the most from them all on this EP. The massively infections 'Brothers' and the sweeping Prog tinged Power Metal of 'Rebellion In Dreamland'. Those two are just the right ones to showcase a band that is so damned good, yet still wants to have mega-fun while doing it. In the metal scene today, it seems that these factors are somewhat lacking. It took veterans like Gamma Ray to remind me of that fact.

I was a rather large fan of Gamma Ray already - this just makes me want to pull out the other albums and listen to them all over again. I find it so sad that they never caught on here in the North America metal market. It’s a shame, because they are good. Metallica, and the others in metal could take a few lessons from these guys.