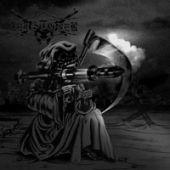 I have reviewed this German Black Metal band awhile back ("Declaration Of War") and recalled that I really enjoyed the album, giving it a 8.2 out of possible ten. The next step in the evolution of Zerstorer is here in my hot hands to be reviewed. Could this be a true evolution for the band that impressed me like they did? Let us just see about that.

Translated from German, this band is called Destroyer... and aptly so. They may not be making any new ground in the field of Black Metal, but they deliver a harsh dose of pure hellfire born metal, with a nice touch of Death Metal feel to add to the insanity for a little flavouring. It is raw, monstrously pounding and will end up attacking you at first chance, like a hungry tiger to a injured antelope. With topics like war, Satan and pain... yep, quality are in the words.

Listening to the album, I am pleased to hear older fashion Black Metal that has almost a punkish rawness to its fury, much like early Venom had. Zerstorer has purposely stripped down to the core, down to some of the heaviest riffing going. It is that raw, barbaric sound and battering vocals that set the table for some very awe inspiring moments. Personal favourite track has to be the Satanic Punkiness of 'Sociopathic Killer'... sort of like if Legendary Hardcore band Black Flag got way heavier sounding and then ended up doing Black Metal thing while being fronted by a demon.

This was a evolution for the band. Stripping it down to be as brutal as it is was a stroke of pure genius. I remember when Venom’s "Calm Before The Storm" came out... better production and not as raw songs nearly killed the BM gods. I hope that Zerstorer takes note, and keeps the music real and raw. They are embracing that potential I saw, and are so close to the apex they seek. Sometimes simple is the effective way of doing things. Bands sometimes forget that.