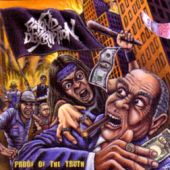 Thrash... a term that to most metallers, is a call to arms for a whole lot O’ thrashing. The metallic style had almost vanished from the metal scene for a while, yet it has seen a total revival and now is growing with a new crop of eager six-stringed shredders wanting to put there stamp on the music world. Tokyo’s Crossover Thrashers Beyond Description are now doing just that, but in their own way.

This odd little three piece unit started out as a balls to the wall Hardcore Punk band that payed veneration to the old school of Hardcore and all that it entailed - but over the years they have matured and incorporated some intense and straight ahead Thrash into the mix. Reminding me a little of D.R.I. and perhaps a little C.O.C. as well, you also get some huge doses of Exodus and other old school Thrash added in. They come out with this massive wall of passion, fire and truly shown just who they are.

Taking the time to listen to such instantly likable tracks as 'Change' or even the very nasty riffing of 'Reveal', one thing for sure, they found that mesmerizing balancing act between Hardcore frantic energy and the technical melodic and heavy brilliance of Thrash. Neither side of this coin controls the other, almost seamlessly meshing the two into what I can categorize as the prefect melding of the two. Shoddy recording in places hurt the band on a couple of tracks, yet that very same thing seems to help in other areas as well.

Coming from the Japanese metal scene where most metalheads over here in North America shakes there head, it is refreshing to hear a band that just hammers it out with such heaviness and power - without any weirdness into it. Hope that Beyond Description start marketing themselves in the rest of the world. The metallic hoards will welcome them with open arms and full bottles of cold beer. I for one, getting the chance to greet them... will do just that.

Good album... good band... ya get what I am sayin’? True that it is not a amazing sort of album, but still very good one worth a few listens.