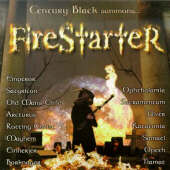 This is the best introduction I can possibly think of to the world of black metal, compilation wise. “Firestarter” is fifteen tracks of various black metal bands scattered around the world. Included are: Arcturus, Borknagar, Einherjer, Emperor, Katatonia, Old Man’s Child, Mayhem, Opeth, Ophthalamia, Rotting Christ, Sacramentum, Samael, Satryicon, Tiamat and Ulver. Whilst some of these names in present day sense do not immediately conjure up thoughts of traditional black outfits, they (for the most part) fit the black label quite well. Over 74 minutes of playing time we are treated to a huge plethora and diversity in the black world circa 1998.

Lots of medieval weapons and armor adorn the compilation’s booklet, as well as the normal corpse-paint that these bands once utilised, the glory days of black metal! It is really quite hard to delve into what are the best and not so best parts of “Firestarter” as the variety is so extreme between the bands. I’ll endeavor to cover some of the less well-known bands throughout black metal circles, and describe their music, as most of you are familiar with big names like Opeth and Emperor.

Ophthalamia are a band that really came out and probably fired all their big guns at once...once comprised of Legion (Marduk) on vocals, guitarist It (Abruptum), bassist Night (Swordmaster) and drummer Winter from Edge of Sanity, Ophthalamia played an interesting brand of medieval tinged black metal with intriguing guitar riffs and really quite different cleanly sung vocals.

Sacramentum earned comparisons to big death metal acts such as Dissection with their founding work, they play a technical brand of typical Swedish melodic death metal. Not at all bad.

Tiamat should invoke the most interest of the more “unknown” bands, in that they started out playing black metal eons and eons ago. 11 years ago. Today Tiamat should not even be considered metal but are still quite awesome, falling into a genre that requires a dreamy sort of conscience to fully appreciate.

Aside from the “unknown” bands, the best songs on “Firestarter” are Opeth’s ‘Nectar’, Borknagar’s ‘The Dawn of the End’, Einherjer’s ‘Naar Hammerem Heves’ and Tiamat’s ‘Ancient Entity’.

Bottom Line: “Firestarter” is an absolute homicidal maniac of a compilation CD. It retails here (Australia) for around $7 or about 4 of American dollars. You can’t get a cheaper price for an introduction to black metal.