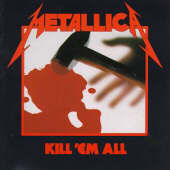 This was probably the first thrash album I ever bought - I got the Black Album as I started to move away from mainstream rock, and then was advised to go right back to the start. After a few spins, I was only ever destined for a life as a metalhead.

The thing that really strikes you about this album, is the youthful enthusiasm of it all. Unemcumbered by alcoholism, drug addiction, family and all the rest of it, Kill 'Em All scorches by in a dazzling blur of speed. Hetfield's voice is still a screech, rather than the gruff but clean tone of recent years, the songs are barely developed, full of abrupt speed changes, and the solos are in plentiful supply - at least three in 'The Four Horsemen' alone.

Kill' Em All is above all a thrash album that celebrates the glory of metal, for metal's sake. The lyrics show virtually none of the socio-political bent that would surface on later records, instead revelling simply in the general brilliance of the embryonic thrash movement.

The tone of the whole album is set by the killer first riff to 'Hit The Lights', to this day one of the greatest riffs of all time, and the song itself is a thing of sheer visceral beauty, climaxing with a spiralling solo.

The rest of Kill 'Em All is simply riff after riff, and the amazing quality of the material is highlighted by the presence to this day of such classics as 'The Four Horsemen', 'Whiplash' and 'Seek And Destroy' in the live set. In fact, last time I saw Metallica, a full 21 years after the release of their debut, cuts from Kill 'Em All outnumbered those from all of the post-Black Album records put together.

Highlights abound: 'Whiplash' in its entirety, so joyously simplistic as to be almost bone-headed, especially the lyrics (They're not funny though. They may look a little cheesy now, but let's be honest. For all of the pseudo-academic bullshit written about extreme music, this review included, "thrashing all around, acting like a maniac" is what being a metalhead is all about. Period. Don't over-intellectualise this shit, just get drunk and headbang.) The first signs of the progression and dynamics that will define the classic Metallica period in 'Phantom Lord', 'Motorbreath', about the punkest they ever got, and the Judas Priest-on-speedisms of 'Metal Militia'. The solos throughout are brilliantly played by Kirk Hammett, although credit for the remarkably clever melodic construction must go to Dave Mustaine. Pick up any bootleg of Mustaine playing live with Metallica, and realise Hammett plays all of his solos note for note. I don't want to overstate Mustaine's input in Metallica, there are some idiots out there who claim he single-handedly wrote all of their best stuff, but the contribution is still significant. Their influences are recognisable - Maiden, Venom, Motorhead, almost every obscure NWOBHM band of all time - but on Kill 'Em All, Metallica transcend all of them by just playing harder and faster than anyone who came before.

That's not to say it's a perfect record. The drumming is shit throughout. Check the hideously out of time fills on 'No Remorse' for proof. Some of the riffing is a little too major-key at times, probably due to the Maiden influence, and 'Jump In The Fire' I've always found a little on the pedestrian side. There is also not enough bass on the record. While Cliff Burton's solo instrumental '(Anesthesia) - Pulling Teeth' is an interesting curio, and exhibits his serious talent, it is only on the next two albums that his genius really comes to the fore. Minor quibbles really though, in the light of the riches that Kill 'Em All provides. When you're having the greatest sex ever, does it matter if the weather outside is a bit on the drizzly side?

Kill 'Em All is certainly not the greatest album of all time. It's not even the greatest Metallica album of all time, they bettered it at least twice. However, it's importance to the genre of metal is arguably the greatest of all their albums, and as a pure statement of intent, it's rarely been bettered by any debut. Kneel before it's might, for the seed of greatness to come was sown in this fucking superb record.

This album begins with a lightning fast picked E-Tuned guitars (Hetfield & Hammett) which sets the pace for what the CD is going to be like. Well in this era of heavy metal Metallica was considered not only to be thrash metal, but speed metal as well. Finely produced by Paul Curcio and Jon Zazula, this entire release is something easy to get into if you're a fan of these genres of music. Metallica circa 1983-1988 put out uncompromising metal which during the 80's was considered pretty extreme.

As to what road they went during the 90's to present day does not reflect anything at all like Kill 'Em All. It was blatantly obvious with the release of The Black Album they simply abdicated their thrash metal roots. But focusing on this album, the rhythms and leads are innovative, Hammett simply shredding on lead and Cliff Burton (RIP) puts out his talent on bass with "Anesthesia - Pulling Teeth". You could actually hear the bass guitar not only on that track, but all of them entirely. Fuzzy bass tone.

There really aren't many thrash acts during the 80's that were more innovative in songwriting quality than Metallica. Although I do consider Slayer, Exodus, Testament and Anthrax were also some damn good thrash bands as well but Metallica reigned superior over these other bands. Musically Kill 'Em All has guitar riffs that are unique, awesome, distorted as all hell and memorable tracks from beginning till the end of the album.

I would consider this album to be one of my most played out records that I've heard, but I still am not sick of these songs. It's a shame that a band that displayed so much potential which is evident on this release all the way up till ...And Justice for All. I think that if Cliff Burton was still around they probably wouldn't have taken their thrash roots away and become a total waste musically. Maybe some would argue this, but I believe that he would've at least kept them within their thrash/speed metal origin.

The lyrical aspect of this release has nothing really to do with Satanism, just filled however with hatred towards humanity without any compromise in that respect. Hetfield's vocals go well with the music especially the high-end screams. I don't consider this release their best of the 80's I'd say, Ride the Lightning, Master of Puppets and ...And Justice for All were their absolute best releases. However, this was a beginning for the band and showed their awesome potential at such a young age.

Metallica used to scoff at the idea of making videos. However, after "One" came out they began to make more music videos to make more money obviously. That's why I'm reiterating the point that if Cliff was still around they wouldn't have become "Metallisux" as coined by most old fans of the group. But Kill 'Em All is pretty much everything good that I look for in a thrash/speed metal release. If you don't have it already in your archives, then I urge you to pick it up ASAP!!!