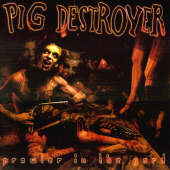 It is hard to review this record. Hard because of how attached I've become to it, on both personal and musical levels. Regarded by many fans of Pig Destroyer (and grindcore fans in general) as the band's crowning achievement (closely rivaled by it's follow-up, Terrifyer), this beast will crush your ears and rupture your mind. From the first second of 'Jennifer' until the last second 'Piss Angel' fades out, insanity shall ensue in both music and words, as this tale of madness, sex and death is told through piercing screams and frenzied instrumentation.

As it has been stated numerous times in many reviews, Prowler in the Yard is among the very few grindcore concept albums that exist (in fact, the very thought seems weird). We are presented with a gruesome story of heartbreak, insanity, sex and suicidal thoughts. All converging in a spiteful homicide, as told in the final booklet text. Jennifer has ditched the protagonist, and over the course of 7 days, his madness grows as his desire to be together again. No medication seems to quell him. Although the album contains some tracks that seem to differ from the main story (which can be interpreted as flashbacks twisted by the man's broken psyche, i.e. 'Scatology Homework'), the main focus here is the Prowler's deranged thoughts following his break-up.

Usually, a concept like this could be taken to just one song. However, that's not the case here.

J.R. Hayes is a gifted writer, and his poetic prose delivers madness like no other lyricist could. And his voice... a complete testament of madness. Instead of a growled style (vaguely employed in a couple tracks), he employs a literal scream of anguish, despair and rage. Every line delivered by J.R. Hayes it's perfect ('Hyperviolet' being my favorite example) in capturing the absolute feeling the protagonist has. Of course, the instrumentation here is of utmost excellence as well. Spastic, frenzied yet very calculated and technical at moments. Recorded on a 4-track in one of the members' basement, the album has a very "psycho-ward" atmosphere. It nailed this atmospheric touch, allowing the listener to be swallowed into this nightmarish story. Sudden tempo changes, abrupt breaks and slow-downs drench this record from start to finish, so as to simulate the protagonist's insanity.

To avoid further spoiling, this record is a must-listen. Not only for grindcore fans, but for fans of extreme music as a whole. However, if you can, listen to the original 2001 version, as the remastered version lacks one track and pretty much eliminates the atmosphere attained in the original record. A record of this magnitude is not made twice, nor can be experienced the same way twice.

So spare some time, play it, read the lyrics along and allow Prowler in the Yard to leave you in tatters...

In an attempt to throw myself out of my comfort zone a bit and look for a new challenge, I decided to pull up my iTunes (which has my entire collection ripped on it), put "shuffle" on and review the first album that played - no skipping allowed. This was the first thing that came up. Here goes.

So I guess this album is the reason that Scott Hull is a Big Fucking Deal? It certainly seems like it, considering the near-universal critical acclaim for this and multiple major metal media outlets (gotta love that alliteration) calling it the "grindcore album of its generation". It's hard for me to imagine what the hype was like for this around when it came out (it was just a wee bit before my time), but it seems like this album was really successful because at least half of Relapse's roster after this album came out tried to go for the same kind of frantic, salad-shooter deathgrind style (or at least splashed it in every now and then). Is this really what started it all?

Maybe it's the fact that I wasn't listening to metal back at the turn of the century when the standard for extremity was a bit different, but I don't quite feel the same sort of ruckus about this that others appear to. To be fair, this certainly still holds up as a fairly creepy and unsettling album, which is surprisingly rare in grindcore. Usually, there's more of a gritty, displaced anger in grind that is more in line with its punk roots, but Prowler in the Yard is an album that seems to cater more towards death metal fans. The guitars have a thicker low end (despite the absence of a bass), and the drums have a certain degree of complexity that you don't really see with punk drummers. That gives Prowler in the Yard a more subdued, creeping feel that sets it apart from the pack. The pornogore lyrical themes supplement this well, as they're very tastefully done. There's a demented spin to the words that set them apart from 99% of bands with similar subject matter. (Not that it really matters since all you can make out are the Microsoft Sam moments, but whatever.) This mixes despondent heaviness with perverted mania, and in that way I can understand why Prowler in the Yard was a media darling and considered to be a landmark album in its style. Do I feel the same way? Not really. At the very least, I can see why it is considered to be an album of such high pedigree.

If I can sum it up in one sentence: this is a classic album I don't really care for. I dabble a bit in grind, but I wouldn't say I'm an expert, so maybe I just don't understand the extent to which this album shaped the genre. That being said, this has a lot of death metal influence on it, and that's more my bag, so if anything this should be right up my alley. It's just that this is a little bit...too musical, if that makes sense. Prowler in the Yard sounds unhinged, but in such a clinically tight way that it feels manufactured. It is scattered, but in such a precise way that it seems too perfectly placed. I'm not vibing with Hull's riff style, either. It throws a bunch of different influences in (death, grind, sludge, thrash, noise rock, whatever you hear man), but they all blur together due to the emphasis on overall tone and getting a full, thick sound as opposed to making the riffs too defined. Maybe Hull was just trying to make up for being the lone guitarist, but the riffs lose a bit of definition in the process. This is both too polished to feel genuine and too muddy to have a bite. Again, maybe that was the intention and that's exactly why you think this is amazing, but I guess it's just not my style.

If you're getting into grind, I would most certainly recommend Prowler in the Yard, especially if you're already familiar with other extreme music. Do I enjoy it or listen to it a lot? Nah. I bought this a couple years ago, listened to it a few times then, forgot about it, listened to it a few times now for this review, and I'll probably forget about it again unless I randomly trudge through my collection in a couple years' time. Aside from the sludgy thrash grooves in 'Trojan Whore' (among a couple of other songs), there are maybe half a dozen other moments on the album that are particularly noteworthy. The drum performance is admittedly pretty stunning when examined, but after a while it just becomes a slurry of blasting like most other grind drumming. It's slightly spicier and has a bit more variation, but still has the same trappings of the genre at the end of the day. Hopefully you'll be able to get more out of Prowler in the Yard than I was able to, because it's quite well done. Just not really my thing.

I’ve never been a grindcore fan for one simple reason: nothing seems to characterize one band from another. It’s always the same music idea, lyrical content, sound or even album covers. In one word this scene is too stagnant for anyone who seriously treats music as a way of life rather than just a secondary media that helps to get stoned or fucked up in a cheap bar.

But then there are bands like Pig Destroyer that try to pump some life into this dead corpse and do it with noticeable success. Their second full-length “Prowler in the Yard” proves that you can write not only ferociously intense, heavy and ugly as fuck music but also interesting albums keeping you on your toes with well thought-out lyrics.

What sets Pig Destroyer apart from their peers is how intelligently the variety of styles are used, which at the end create a destructive machine spilling relentless pulsating metal. The first thing that really stuck in my head were Jr Hayes’ vocals. This guy is nuts. On every track he yells and screams his head off and here and there sticks in the occasional death metal growl. Drums, if I say they are super fast machine-gun bursts I won’t surprise anyone, after all we are talking about a grindcore band but that’s not all there is to it. Brian Harvey’s pounding could become perfect lesson material to many young drummers if he could only take his foot from accelerator and drop some RPMs. Going hand in hand with rhythm section is Scott Hull’s guitar. Even though (on purpose) it’s lacking bottom-end, Scott’s axe freely moves between punk, death, grindcore, thrash and hardcore. There is no bass description cause they don’t have one. Amazingly enough three instruments, counting insane vocals as one, create so much music that I don’t think bass would bring anything creative other than deep pounding in your guts. Which actually might be an excellent idea...

Bottom Line: One of the most intelligent and intense grindcore releases of the past decade.