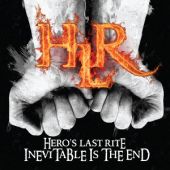 Type: Full-Length
Release Date: 2010
Label: Self Released
Genre: Thrash
1 I Dwell Within
2 Inevitable Is The End
3 Lead (Behind My Back)
4 Gale Storm
5 Hero's Last Rite
6 Hopeless Genocide
7 Shame
8 No Regard
9 The Hell You're In For
10 Why We Die
11 Bleed

Hero’s Last Rite performs a Slayer influenced brand of Thrash that is mixed with some obvious core influences. The music played by this band is fiery and powerful and this is demonstrated early in the proceedings with the highlight title track. This song will get the juices flowing with its aggressive nature and memorable chorus.

The music on this disc is more comparable to Slayer circa "Seasons In The Abyss" than the classic "Reign In Blood" because of the slightly more open-ended approach the band takes. There is some melody to these tracks and not pure punishment at every second as well. One can see variation added in tracks like 'Shame', which features some stellar solos to break up the pacing. Also, the transition from the storming 'Why We Die' into the pretty closing acoustic track 'Bleed' is effective.

For the most part, the music shows a fairly high tempo, however and remains fairly gripping. There is a lack of polish that prevents this from ever reaching the status set by Slayer with their greatest works and it does make the recording feel slightly underdeveloped. The musicianship is pretty tight, but it could be tighter and the vocals are rough around the edges. It’s these issues that make this a solid release, but a far from spectacular one by any stretch of the imagination.

Fans of both Thrash and Hardcore together will be the ones that derive the most enjoyment out of the release because it’s a hybrid of sorts, despite sticking to a rigid mindset. I had a good deal of fun with "Inevitable Is The End". It’s well performed, but lacks a bit of spark and refinement.