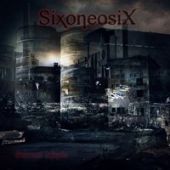 To say that I know about this band, would be a lie. In fact I had not even heard of them until they graced my desk. Looking them up on the web, was nothing short of a small challenge, but one I eventually won.... and now I have all the information needed to write about Sweden’s Sixonesix.

Sixonesix is a grouping of friends from other bands ( Guidance Of Sin, Sanguinary) to make music that appealed to them in the Melodic Death Metal vein. Good thing that they wanted to make this music for themselves, I am not very confident that others other than the artists here would actually agree. Truth be told, this is a very disappointing release, and after hearing a little more from other albums they have - it is like that across the board.

Be thankful that there is only three songs on this EP, as this is a type of torture to listen to this lower than average release. There are sippets of something better, but the whole thing was simply bland and lacked any depth and even power. It is heavy loud and abrasive sounding on the surface - but dig into the EP’s music... the heart and feel was left out of ever note and word given.

Music without substance, is a thing that both metalheads and non-metalheads alike hate more than anything else, and this album is a prefect example of that. The members of Sixonesix seem to have talent, wish that they would have used it. "Scarred Minds" has scarred more than my mind... it has insulted metal.