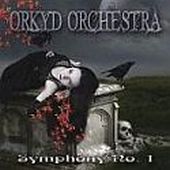 Female fronted bands have been one of my hidden joys for a long time. Ever since I was twelve, and I heard The Plasmatics with legendary metal/punk queen the late Wendy O Williams showing off just how the ladies of metal can rock harder than most. I have wanted to see more metal women with this amazing levels of talent. When I saw that Orkyd Orchestra was just that, that was the first one I threw on. That was where my excitement ended... and I had to listen closely. I had a mixed bag to go through here.

Germany’s Goth/Power metal outfit Orkyd Orchestra was founded by ex members of Encyclia after the founder of this band moved on to play ‘other’ styles of music. The remaining members wanted to make sure that this bands collection of material was not going to go to waste so they recorded four of the songs under the new moniker they have chosen.

The four tracks here are musically impressive as hell, but it is a problem with the vocals that made me hit pause more than once. You could tell that Katy Gollner has the talent to match up with anyone today, but the vocals power for this tight band was lacking. Whether this is a vocalist that is growing into her part in the band, or the recording that makes the vocals almost non-existent, it hurts the music that is at the heart of this project. I am not saying that she is not talented in any way...far from it, in truth... I just struggle with the lack of power Ms. Gollner has going throughout the four songs.

In short, I love the music, hate that the recording makes the vocals very muddied or just to vanish from the album. I would love to hear this EP re-recorded and perhaps given a couple more songs as well. I have this deep gut feeling that the way it has been produced is the problem, and that this band has a shot at being international headbanging superstars if the vocals were brought out. It is a pity... but it is what it is. Orkyd Orchestra can be a viable act.