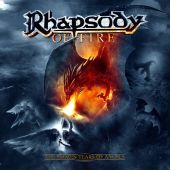 Much like Blind Guardian, Rhapsody of Fire has been going through a period of irrelevance. Starting with the Symphony of Enchanted Lands II album they lost a spark of creativity and some of the vibrancy that made up their earlier work. A name change later and Triumph or Agony emerged; a lame duck release if ever there was one, it lacked anything truly notable leaving the impression that RoF had run their creative arc. Now aligned with Nuclear Blast, alongside the aforementioned German stalwarts, it is time to see if the band can get back on track.

On the first listen this album left a similarly underwhelming feeling as the previous couple of works; nothing really jumped out and demanded attention. At first this seems to be a troubling turn of events, but in hindsight the reason this album doesn't have that immediate feeling is that there are no real "standout" tracks by design.

The Frozen Tears of Angels still maintains that syrupy orchestration and overblown display of ability, but it is also a more developed overall work. Even though Crystal Moonlight could probably give Emerald Sword a run for its money, it is nestled neatly in amongst the other tracks and is consistent with its surroundings in terms of quality and development. The flow from track to track is finely executed and brings everything together in style.

The first song (Sea of Fate) seems a tidy summation of how consistently defined the whole album is; it doesn’t seem to have the expected burst and histrionics. However, closer inspection shows that really the bridging is a lot tidier and perhaps a little bit more subtle which makes the track feel more refined. Reign of Terror is a fascinating leap to the other end of the spectrum. Punctuated with choral outbursts, Fabio Leone’s use of rasped vocals, staccato powerchords and sudden lead flourishes… the persistent jagged edges of the track are a fun injection of aggression into the RoF sound. Even with this striking variation it feels consistent with the surrounding material and develops the involvement of the listener in the greater piece.

The only really jarring moments in the album are the transition from power ballad Lost in Cold Dreams to upbeat number On The Way to Einor – which is somewhat mitigated by the solemn passage after the initial riff dies away – and the introduction to the title track which tries to force drama in a ham-fisted manner. The former is understandable as it is only an awkward clash of approach, but the latter speaks to the tendency of the band to place their narrative concepts ahead of the music in places, which was evident on previous albums.

After repeated listens the quality of this album has really shone through; it is a work that has been finely crafted and really delivers on the symphonic element of RoF’s music in form and structure. The Frozen Tears of Angels represents a fine return to form for a band that seemed like it was wandering off into oblivion. It should also inform the narrator, Christopher Lee, as to what an actual symphonic metal album should aspire to.