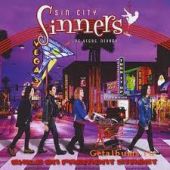 Good straight ahead Hard Rock is hard to come by these days, but I have some that kicks ass. I have known the Sin City Sinners frontman Todd Kerns for years, as he kicked ass and took names in the band Age Of Electric around Canada in the early 90's while I played for many bands in the Saskatoon area. He now lives in the sinner capital Las Vegas and has developed a Rock And Roll Juggernaut to bare on an unsuspecting world... and it is much needed in the void of true Hard Rock.

Combining the bitter angst and aggression of Guns And Roses, the natural musicality of Aerosmith and just for fun then mixing in the nasty attitude sides of Skid Row with Soundgarden and even a little LA Gunns as well... Sin City Sinners command all and take what they want. With infectious riffs, party lyrics and a whole lot of attitude and swagger, this is a band that makes G’N’R in their heyday look a little light and droopy to me. They have what I like to say is smooth nastiness with attitude happening.

This album really gets a angle on the whole nasty rock thing. 'Numb' just explodes off of the disk with a wicked riff, making me think of Skid Row off of the "Slaves To The Grind" album while the slow yet not very light 'Ah! Leah' shows the band diversity as they shift into there own version of a power ballad. The highlight for me is the not very subtle lyrics of 'Arianna Incomplete' that showcases a poignant side of the SCS crew.

This is not metal as such, but it is one of those rare album that you naturally want to party with and still play loudly. My advice to everyone is get this album, grab a couple of six packs of your favorite brews, grab your girl and head to the beach with a good gettoblaster and a load of buddies doing the same. This album begs to party at maximum volume. I have not heard an album like this is a long time.

Sin City Sinners have a new (Old?) convert to their Rock ‘n’ Roll Army... and he has a beer in hand to salute them!!! Let the party start!!