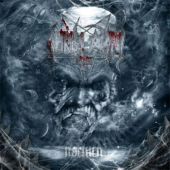 Now this little gem really surprised me. I didn't even know that Christ Agony released new album in 2011!!! I think the last time I heard the band was in 1996 when they released "Moonlight - Act III". Then I had some short fascination with Cezar's side-project Moon and that was it. I completely forgot about them. But here it is, the latest album, called "NocturN" and I've realised how much I'd missed this sound.

Cezar's harsh vocals and that amazing atmosphere which sounds only like Christ Agony, nothing else. It's like Immortal's "At The Heart Of Winter" - there is only one album like that and none other sounds similar. But with Christ Agony it seems that Cezar was able to recreate the same feeling, same musical climate in which you feel great. And it's obviously Black Metal (maybe few elements from Death Metal, but really really few), maybe slightly closer to what Agalloch from USA is trying to play, so there are no furious tempos, but nevertheless the Black Metal feeling is here. Mostly thanks to Cezar vocals, which are really unique, it is a shriek, but closer to old Venom than early Emperor. There are various rhythms, but all are perfect compositions, no matter how many changes are during the track. And this is one of the artists, who should write music for movies - it would be amazing background to any horror I can think of.

The best track on this album to me - 'The Stigma Of Hell' - real beauty on this CD. And this album is another proof to me that if you master playing the guitar, your solos don't have to furiously fast, as long as you record a melody line which will haunt the listener. And I am definitely haunted. Oh, by the way, the drums on this album were done by Inferno from Behemoth. Now I can't wait for their next album...