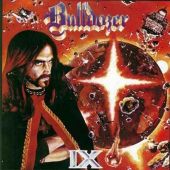 Let’s turn quickly to the music itself. Well, first of all, I am sorry to inform you that the production is more or less on a par with the lyrics. It has the power of a dick after two orgasms within the last 30 minutes. (I beg your pardon. Bulldozer’s lyrics have confused me.) Maybe due to a small budget, the guitars sound pretty thin and the snare drum has no impact as well. Thus, the voice of AC Wild is the most characteristic element and this dude cannot hide his biggest inspiration from time to time. Especially at the beginning of 'The Derby' he sounds like his venomous idol Cronos. By the way, this is another song with very strange lines that combine “Holocaust” with “Hooligans”. Does this form of lyricism make sense? Of course, not at all – but I wanted to write about the music.

IX offers ix pieces, but don’t expect any killer among them. The opening title track is fast and pretty expressionless, 'The Derby' seems to be written within five minutes in view of its simple football staccato and even the acceptable riffing of 'Desert!' has to face the enemy within when it comes to the moronic guitar line that appears for the first time after 86 seconds. 'Ilona the Very Best' has more than a modicum of momentum, but I guess this was the initial impulse that started the evolution which ended in “Yum Yum” and so I cannot enjoy the track whole-heartedly. Generally speaking, Bulldozer presents another portion of their speed/thrash cocktail, while the sporadic horror elements of the debut do not re-occur. The band does not lack energy and filth, but it is also true that their will to make noise was always bigger than their compositional skills. Songs like 'Heaven’s Jail' have a solid riff foundation, but the Italians fail to make a great track out of it and the stupid fade-out at the end of song illustrates the lack of convincing ideas – and you will find more fade-outs here.

The German metal media of the eighties hated Bulldozer and this alone was reason enough for me to like the trio. But juvenile opposition aside, I cannot deny that the evolution of the band between 1985 and 1987 was fairly questionable. IX is an under-average output of dirty metal, not totally bad, but with a significant lack of coherent song structures and creative substance. The playtime of less than 32 minutes says a lot in this respect. Maybe the dudes still had a finger or another part of the body in a natural orifice of a woman as they began to write this album. This would explain a lot.