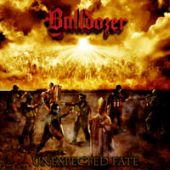 Myriads of bands have returned after a decade-long hiatus and rediscovered their metallic enthusiasm very authentically… It's amazing to see that losing the interest in metal for five or ten years is a symptom unknown to fans, but many musicians suffer from this disease. Generally speaking, we have three types of bands that come back. Firstly there are the ones that start their second career and release more albums than ever before (Necrodeath). Then we have those who would have been well advised to stay in their three-room cage instead of ruining their once glorious reputation with a powerless release (Iron Angel). Finally, between the two aforementioned poles, we all know formations that came back for exactly one album only in order to become afterwards a victim of their own lethargy again. Forbidden can be mentioned here and, you guessed it, Bulldozer.

Maybe due to their spaghetti-filled souls (copyright: TheBurningOfSodom), the Italian cult trio did not have enough hunger to take the scene by storm again, but I don’t think so. Unexpected Fate does not lack energy. Bulldozer performs aggressively with mostly swift songs that do not care about dubious twists and turns. Already the opener with its typical scream after some seconds paves the way into the better part of Bulldozer’s past. 21 years after Neurodeliri, the band has caught the spirit of its discography-highlight again. Speed, power and belligerence show up, until the end of the solo where the stuttering guitar offers unintentional humour.

Honestly speaking, there are more minor flaws to find. The background vocals of 'Aces of Blasphemy' are rather unnecessary and do not add value to this actually strong number. 'The Counter-Crusade', equipped with strict high-speed sections, strong melodies and a bass solo that sounds like the guy is playing his instrument under water, suffers from its under-average chorus. Anyway, Bulldozer shun away from any form of embarrassing elements. (Wish I could say this is a matter of course, but their multi-coloured discography tells me this would be a lie.) Instead the band surprises with a killer like 'Use Your Brain' (please note the wise title – did Ilona allow this kind of lyrics?). It connects gloomy sections with straight verses, a hardcore-affine chorus and a rumbling part that leads to the solos which are the best so far on Unexpected Fate. Unexpected fate? Unexpected hit!

The album is well produced. It sounds pretty modern, but not too clean or even overproduced. Bulldozer’s songs do not deny their roots, but the combo did not look for a cobwebbed sound and I admit that I like this approach. To be retro at any cost does not make much sense in my humble opinion. Okay, the occasionally occurring bubble gum guitar lines of the album’s nadir ('Micro VIP') have the charm of a visit to a dentist, but this is rather a problem of the backfired composition than of the mix.

All in all, Unexpected Fate sounds less eccentric than some of their early recordings and even though I tried to reinforce the Italian vibes by eating a pizza during the creation of this review, I cannot say that the album blows me away. Nevertheless, it was a nice sign of life of a band that has always been likeable and sometimes even competent, too. By the way, has the group forever gone to bed or does it just take again 21 years until Contini and Panigada release their next collection of compositions? Dudes, if you read this: I am ready for 2030.