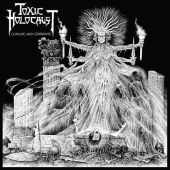 Type: Full-Length
Release Date: 2011
Label: Relapse Records
Genre: Speed, Thrash
1 Judgment Awaits You
2 Agony Of The Damned
3 Bitch
4 Red Winter
5 Nowhere To Run
6 I Am Disease
7 In The Depths (Of Your Mind)
8 The Liars Are Burning
9 Revelations
10 Sound The Charge

How many different styles of metal can one act get into their music - a question that oddly enough comes up once in a while in my circles. Some bands combine two or three styles with ease, while other go for broke and add a whole shit load into one. The results can either be amazing or just a hunk of noise with no direction.

Portland’s Toxic Holocaust seems to be a band that jams every imaginable style of heavier music into their sound. Old School Thrash, Older Black, Speed, Punk, bits of Death dot the bands musical landscape and is mixed lovingly into a ‘toxic’ soup of what they were listening to and ended up putting out there on four albums and many splits as possible. The results are a journey all metallers can relate to.

In listening to the album, it strikes a cord as it shows where metal has come from. It is a true representation of metal from the 80's, some 90's and even newer shit into one. It may sound like all of that, but it really shows that sound is still relevant and fresh as it was back in the day. The victory is that Toxic Holocaust blends it all and truly shines. One listen to a song like either 'Agony Of The Damned' or 'Red Winter', clearly showcases that old styles of metal is not obsolete or relevant. It is bullshit - it is and clearly will be for years to come.

You can't go wrong when a band has the confidence to show where they have come from and the balls to announce where they are going. Toxic Holocaust may play all of the old school side of Thrash/Speed Metal - but for all of us, it means that we are still going forward because we have to balls to take what we already have made and make it better and fresh. Sounds easy to pull off, but it is not in any stretch of the imagination. Take it from this old Headbanger, a hard journey reaps many rewards.