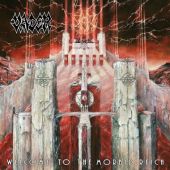 Type: Full-Length
Release Date: 2011
Label: Nuclear Blast
Genre: Death, Thrash
1 Ultima Thule
2 Return To The Morbid Reich
3 The Black Eye
4 Come And See My Sacrifice
5 Only Hell Knows
6 I Am Who Feasts Upon Your Soul
7 Don't Rip The Beast's Heart Out
8 I Had A Dream…
9 Lord Of Thorns
10 Decapitated Saints
11 They Are Coming…
12 Black Velvet And Skulls Of Steel
MetalBite on YouTube
MetalBite on YouTube

No need to introduce this band since they've been around since 1983. Vader have nothing but good riffs, solos, vocals and songwriting on this album. Everything that's positive in terms of the music is there. There's no lagging from a musical aspect. Another album that you can listen to over and over and never get sick of. I don't own any other Vader releases, so I can't really compare this one to their previous ones. But there's much to say about this latest release by them.

2011 was a year of disappointing metal releases. This was one of the albums that didn't fall short of fan's expectations. Vader fulfilled everything musically and they're only a 3-piece on this lineup. 14 tracks of purely dark and unrelenting darkness that has an enormous amount of energy put into the music. The riffs were catchy and the tempos varied. That crunch tone of the guitar was most noteworthy. It sounds like they tuned down their guitars to make them fit in with the morbid setting. Peter's vocals were deep for the most part but backup screams were also present on here. Both guitarists had some really killer leads. The drums were going with some fury on tracks that had faster tempos. They fit in well with the music. No lagging in that department at all. Amazing songs that clocked in about an average of 3-4 minutes in length. There were some instrumentals too as well as bonus tracks. "Troops of Tomorrow" was a killer ending to the album. The production/mixing was awesome, but it was difficult to hear the bass guitar. That's the only real negative thing to conclude about the album. The rest of the instruments blended in smoothly to the mixing. Really memorable songs that expend death/thrash to the core. The tempos on all songs varied and with a lot of tremolo picking. The guitars were at a perfect chunky tone that suits the double genre fitting.

If you're a death metal fan or a thrash metal one, well Vader fulfills both of these genres so Welcome to the Morbid Reich well suits these categories. Again a great album to listen to repeatedly and can never become distasteful. The overall musicianship was amazing. No mistakes and everything came together on this one. No leads that were misplaced or overused, variety in tempos, and dark as hell. Purchase this one because it's so worthy of praise!

Death metal from my own mother country of Poland has always had a soft spot for me; mainly because you can count the good death metal bands on one hand form the Eastern European continent. As long as I’ve been a Vader fan, which is going on over 20-years, I’ve always loved the natural progression each release has taken. From the humble, yet brutal beginnings with The Ultimate Incantation Vader has managed to decimate the death metal underground with a brand of music that no longer pays ominous tribute to Slayer and now sits atop the leader board in terms of fast, disruptive heavy metal.

Welcome to the Morbid Reich might not be the most original name (working off of the band’s early demo title), but the music is unmistakably Vader in all facets. The band has a revitalized energy that was there for Necropolis, but seemed to just sort of labor a tad here and there. Still a terrific album, the overall energy of Necropolis was just a little…off for my taste. One track into the latest blasphemy and there is a guided tour into all things broken and jagged, with the familiar Peter vocal that sounds as if he’s gargled with glass shards while swilling beers in a darkened room. His is one of the more potent vocals in death metal music; it’s absolutely easily recognizable. What is always vital about Vader is the lyrical content that never seems to get trite or dull; there’s always a brutality and poignancy that Slayer used to have years ago before they took over the Pantera pickup truck-driving crowd and now offer a lowest-common denominator effort each and every time. The riffs in “Come and See My Sacrifice” are so decidedly destructive that it’s nearly impossible to remain calmed during this album’s duration. Every track from “The Black Eye” to “They Are Coming…” is a how-to in terms of creating and cultivating true death metal that doesn’t retain water along the way. “Only Hell Knows” carried enough patriotic pride to decimate an entire country in war; if Slayer was played in fighter planes in the Gulf War conflict, I can only imagine what this track might do to compliment the euphoric feeling of hitting enemy targets. Everything that Slayer once was but is no longer is in Vader’s arsenal kit, so I suggest you check them out.

Traveling through the album for a second time only lends more credence to the notions that this is a much-wanted kick to the throat that many a band needs. Our movement cries out for a band like Vader who, selflessly, affords us brief glimpses into its collective psyche and takes us deep into the caverns of strife that each of us carries inside. The attentive riffs, the brutal and intentional barking vocal and the intelligent, yet sardonically sadistic lyrical content afford us a fantastical and realistic look inside the fascinating world of death and arduous life experiences we can’t ignore or escape short of the former’s illustrious grip. The causal derivative here between the Vader fan and the band is a perfect marriage because we expect the band to take us to places we fear and loathe, and the band leads us there with no hope or promise of peace afterward.

Vader has always been about the purity of the death metal arena, that’s just a given from the band’s long, storied discography. They’re great at creating feelings of dread, hate, war, rage, despair, revenge, arrogance and strength - the pinpoint perfect formula necessary for any true death metal fan to keep coming back for more. After hearing Welcome to the Morbid Reich twice and going back into the hellish musical hole for more, I can say that the non-rational contemplative essence that is my chemical makeup might fare well for yet another day without incident.

Vader has put together an album that simply sparkles with Death Metal brilliance from beginning to end. It’s a testament to how a simple approach to the basics of the genre can lead to a well-rounded album without resorting to unnecessary pyrotechnics. The music here is fast, but not overly indulgent from a musical standpoint. It instead puts a focus on tight and consistent song-writing that obviously takes hints from the classics of the genre, but puts everything within a more modern frame.

"Welcome To The Morbid Reich" gets off to an absolutely fabulous start with the title track and 'Come And See My Sacrifice' leading the charge and though the album lets up a bit towards the end, it’s pretty thrilling stuff throughout. The songs on here aren’t mindless Death Metal either, there’s a great deal of tempo and rhythm changes to keep things interesting. Vader have proven to be a master of their craft here and this album comes at a time when an outstanding release was sorely needed in 2011.

"Welcome To The Morbid Reich" is exactly what great Death Metal should be: music that is powerful, exciting and memorable in equal measures. One can overlook a slight lack of originality because the quality of the music as a whole is so high.

In a year that has lacked stellar releases, "Welcome To The Morbid Reich" is exactly what the doctor ordered.