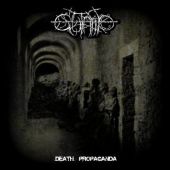 From the wind swept fields of wheat that is the prairies of Canada comes a little known movement in metal. These same fields and small cities are alive and dealing out some very amazing Death and Black Metal from a place that is known more for miles of standing wheat and livestock rather than blasting metal. Saskatchewan is a bourgeoning hotbed for the newer versions of extremes in metal, and to prove that here is one of the new guard of this movement- a Saskatoon based band called Autaric.

As young as this band is, these four explode with a furious punch and power that is beyond their years. With very acrid vocals and very heavy riffing, this quartet is the prefect melding of intense and blastbeating Black Metal that cavorts with in your face Death Metal. With a powerful musical element and vocals that are like getting sandblasted with shards of broken glass... they epitomize extreme metal while adding in a whole load of originality that ends up creating just what Autaric is.

Throughout the 30 minutes it takes to listen to eight songs, you come to hear a young band that has not even begun to show the extent of their talents yet... but they still blows you away with what has been made. Tracks of interest are 'At Winters End' that show a perfect mix of heavy and melody to while the strong and blasphemous lyrics of 'The Defecate God' drive home the fact that they are smart and very unafraid to write songs that are not the norm even for metal.

While I found that the recording was a bit rushed and some steps nearly omitted, the whole album seems to be more muddy sounding that it really needed to be. It does not stop my excitement and exuberance I have of being so honoured to hear Autaric has a very promising career if they got the right backing. If they can do that and never stray from what they have made for themselves, they will make a huge splash on the world metal scene.

Are Autaric going to be Canada’s answer to Entombed if they continue? I’d say a big yes on this one.