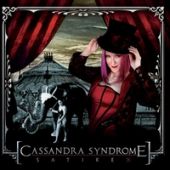 Operatic Metal is a bold statement all by itself, it combines soaring vocals with some brutal metallic riffing and pounding basslines into a symphony of pure metal bliss. I for one, have really gotten into the massive power of the talent, the theatrics and pommelling heaviness that seems to all effortlessly combine into one. Cassandra Syndrome is one of these Operatic Metal up and comers that are storming the metallic shores.

This Maryland based outfit shows just what operatic metal means. Irene Jericho who handles the vocals, soars and swoons like any opera singer, yet has a power that most rock singers dream they could use. The rest of the band (Chris Kackley and Jen Tonon on guitars, Joe Cariola on Bass and Jay Jericho on Drums) explode out playing heavy yet smartly simple riffs that accents rather than overpowers the vocals. The result, is pure metal magic.

Giving one listen the perfectly smart 'The Fool' or the powerful and yet edgy 'No More Peace Forever' shows a band that can create music with a purpose while still blowing your doors off with an attack that is as brutal as a shark feeding frenzy. The band makes the perfect backdrop for the intelligent lyrics and the powerful vocals that ends up creating metal that has a mind as well as the all important sonic might.

The recording was a very tinny production and lacked depth throughout, which did take away some of the punch of the album, but Cassandra Syndrome’s talent shone through and made an album that is worth much more than the recording processes seem to say. If they picked the right producer and used a different tilt to how it had been recorded the band could have had a better album at the time.