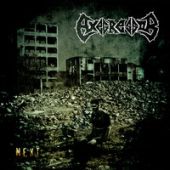 Finland. One of the worlds biggest exporter of seriously heavy Death Metal and a Mecca for us as metalheads. Yet it has a Thrash scene that is now on the rise. It harkens back to the Bay Area Thrash scene that was going on in the mid to late 80's, and yet this Thrash is much more. Axegressor is one of these bands striving to bring back the Thrash days - but to have it take over the world.

Playing as a classic four piece Thrash outfit, exploding with all the fury and passion that their many predecessors had. Sounding sort of like Overkill and early Exodus with some honour payed to some Speed and a bit of Progressive Metal that also have influenced them over the years, the end results is remarkably strong and as powerful band that have captured that heavy vibrance that the scene had back in the day.

One listen to Axegressor’s album, one thing is for sure - Thrash is back and is bigger than ever. When you hear tracks like the metallic fury of 'The Only Reward' to the mid tempo romping growl of 'Ironcrossfire', it becomes clear that they have taken all of those influences and have added in their own flavouring to make there own Thrash-d’jour and make it there own. It is savoury as all hell.

Some might say that Axegressor sounds so dated. I beg to differ. One listen to the album and it will make anyone see - they have taken Thrash and invented it in their own warped yet stellar way, and have breathed new life into a genre of metal that sometimes overlooked even today. They have reinvented the wheel here, and they are gonna roll over anyone in their way... Thrash style.

It is time to throw up the horns, headbang like mad and open a tall cool one to enjoy with this album - Metal is back. Thank you Axegressor.