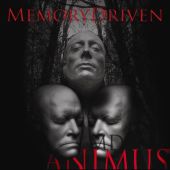 Here is the second album by Memory Driven, a band formed by renowned Doom Metal musician Dennis Cornelius. One can gather that ‘tis the reason they’re described as “Progressive Doom Metal”, although the word “progressive” by itself is probably much more accurate.

“Animus” is not unlike their first album, with its somber tone, mature song-writing, highly stylized vocals, clean sound, and all around excellence. This album is rich in textures and contrasts with the passages ranging from drab to beautiful… it’s thinking man’s music, perfect for an hour of quiet contemplation.