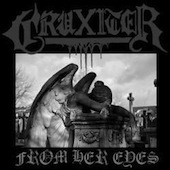 Texas has always been known for doing things simple yet in a really big way, it is in their genes, I guess. The Lone Star state’s style of metal in no different... with power, confidence and pure attitude they all are in a class of their own. Cruxiter is one of those powerful Texan bands that will kick your ass really hard and steal your beer at the same time.

Riding the fence between being Classic Blues based dirty Hard Rock and the wild and nasty and in your face of straight ahead Heavy Metal, Cruxiter nails you harder than a wild bull on a injured rodeo clown. It reminds me of old Saxon, Y&T and even vintage Motorhead in spots... while holding some shadings of Guns and Roses as well. Gotta say that this is how hard rock has always been needed to be delivered, straight to the jugular with not a moment of hesitation... and Cruxiter goes right for the blood.

With just three songs, it comes across as a little bit of a tease, but for me... it is a good tease as it makes you so eager for more of the music. Each track reminds me of the Metal/Hard Rock glory days, where you blasted this in your car while carefully hiding a open bottle of beer between your legs. Very well put together, this band shows that the old tradition of biker rock still exists and is breeding rapidly.

The recording is not the best, but it seems that it was done on purpose so these ‘little’ flaws adds to the grittiness. The end result is a very enjoyable album, much like any and all Motorhead albums ever released. Cruxiter is not the most technical of bands out there, but who damn well cares - this is basic blood and beer powered music at its finest meant for playing at the highest volumes.