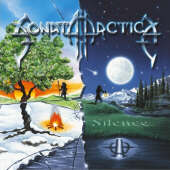 So, here it is, the sophomore release from a band that opened my eyes to power metal. Their debut “Ecliptica” impressed me so much that ever since I heard Sonata Arctica were hitting the studio to record their second full-length I impatiently counted the days, hoping that out of the hordes of power bands in existence, these Finns could give this genre a kick in a butthole and with “Silence” bring enthusiasm to what are typically a boring variety of releases.

Was the wait worth it? Hell yes and then some... As hard as it is to believe “Silence” beats “Ecliptica” in almost every aspect; compositions, arrangements, production and musicianship. From fast songs to dreamy ballads every track is just perfect. Tony Kakko with a strong, melodic voice doesn’t only depend on falsetto like so many power metal vocalists but rather sings in his ‘normal’ range that gives him much better control and ease of expressing emotions. The outstanding work of Mikko Harkin’s keyboards creates an excellent atmosphere, which combined with flawless guitars, and a super-tight rhythm section takes this album to new highs.

It doesn’t matter if it’s a ballad or high-speed song; they are all perfect. From the galloping ‘Weballergy’ that will make you stand and pump your fist, through the romantic ‘Last Drop Falls’ and ‘Tallulah’ to a powerful choir-ending in ‘The Power of One’, beautiful melodies, great solos and arrays of emotion will capture your mind and won’t let go for a long time. “Silence” is simply brilliant.

Last time I said: ‘Sonata Arctica is definitely one of the best newcomers on the melodic power metal scene’ this time they took over the throne.

Bottom Line: These guys are so good at what they do that I expect them to take their music on the next album to an undiscovered level of power metal because in “Silence” they did everything that could possibly be done within known frames of this genre.