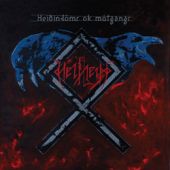 Blackened Viking Metal is about as harsh as you can get in the realm of metal. It is this fact that makes the style both stand out and freak out those who are Extreme Metal Virgins. One of the best who scare these posers come from the Black/Viking Metal Mecca of Bergen Norway. It is called Helheim.

With brutality, straight ahead sonic aggression and this amazing knowledge of Viking Mythology stemming from a deep passion for it all, this band has combined it well into one. Mixing monstrously heavy Death, hell spawned Black and berserker- friendly Viking metal, they come at you with a sound that is so powerful and heavy, yet commands this shocking amount of melody and complexness that is not well known in some areas of the Norwegian Death/Black/Viking metal styles of things.

Despite being sung completely in Norwegian (which my handle on the language has faded in the last few years), the feel and power that is there makes it all better - the way it was recorded makes every note just jump out of the speakers right at you. So many of the songs are straight out amazing and hauntingly oppressive, I will not just pick just one song and opt to just saying tor anyone just to pick the album up and make their own decision on it.

I am going to brush up on my Norwegian and dive deeper into the lyrics of Helheim, and get a fuller feel for these mighty metallic warriors. For those of you who cannot understand any of it - it still is an album that stands up to things even if you don’t understand a word of it. Helheim is a beast of a band and that is half the battle in the race for being the very best. They are just that.