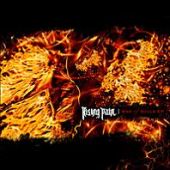 Metal like wine, gets better with age. It allows the band to perfect their sonic blitz, and to consolidate what it is that they want to say with pinpoint accuracy along with their musical attack. I have reviewed Rising Pain before, and I happily do it once again. They have been a favorite of mine, and I wanna see if that still holds true.

I have played their 2009 release "The Essence Of Decay" so many times, my wife nearly has asked me for a divorce more than once due to my use of maximum volume while doing it. It has also become one of my mainstays in my MP3 player for a hell of a long time. Rising Pain had handed me another gem... this time, it is more than just amazing. They have grown, matured and know now how to kick ass better than ever. This Thrash/Death/ Progressive act has left the Sepultura and Cannibal Corpse leanings behind and forged a style that is uniquely them without forgetting where they came from.

This EP is full of the most impressive metallic gems that just jump out at you, songs that are as extraordinary as any while being damned brutally acrid with the way each song is delivered with this amazing pinpoint accuracy that compares to a world class sniper. Not to mention the music also rumbles and stomps almost as heavy as a full divisions of tanks against a pack of rabbits in a open field. This is metal in the new millennium, ones that moves forward while still keeping it brutal to the end and pays tribute to the metal that has shaped it in the past.

This is how metal should be dispensed... with venomous brutality mixing with perfect symmetry of talent, unabashed venom and explosive aggression. Rising Pain is a band that I need to watch even more than most, because they have all the tools to end up as one of the top metal acts the world has ever seen... and ever will as well.

Attention Metallers everywhere: Fuckin’ buy this album!! I am clear on this point... yeah I am? Now... where is my damn beer...