Working as a committed unit, the trio forming Invocation through the projection of mysterious visions, have continued to craft exemplary black/death metal under the Chilean dark watch. With the mighty Iron Bonehead Productions sheltering and promulgating the wicked works of Invocation, the band has managed to once again unleash another chapter within their catalog. Fastened to nightmarish visitations, "Attunement to Death" redistributes horrors of the past and newly bred forbidden vaticinators for the listener/s pleasure. MetalBite caught up with Invocation's Sense of Premonition (guitars/vocals) for a few words as the "Attunement to Death" was just released. 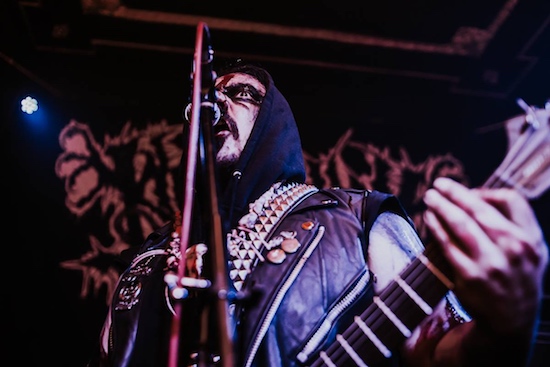 What event/s triggered the idea and eventual officiating of Invocation?

Salve! Invocation was born in late 2015 A.B. and has endeavored to combine influence from the most chaotic death metal with the eternal darkness of occult and ritualistic black metal.

How did the band meet and form?

The band is composed by 3 black entities, very old friends with clear ideas. In our first rehearsal we down tuned our guitars/bass and the first track 'Devout Effusions' was born immediately, then came the name, the logo, etc. So, over the last years we were able to refine our sound into that we call "Ritualistic and Hypnotic Black/Death Metal Darkness", but beware! there are still mysteries to explore…

How did Invocation get signed to Iron Bonehead Productions?

We sent a letter to Patrick, which contained a cassette with the demos of the EP The Mastery of the Unseen; we had a good response and decided to work with Iron Bonehead. They know the underground very well and have done an excellent job with our music. It is undoubtedly one of the leading labels in terms of underground black death metal worldwide.

What drove your interest in Iron Bonehead Productions?

Obviously the excellent distribution and our goal of arriving outside of South America. We have always followed their releases and we are good consumers of extreme metal, so being under their mantle has been a great honor.

Though the titles may be somewhat self-explanatory, could you give MetalBite a bit more insight surrounding "Seance Part.I" and "The Mastery of the Unseen" meanings?

Seance Part. I was our first approach to paranormal topics and naturally The Mastery of the Unseen was also the consolidation of that. In the case of our first demo Seance Part. I the name it's totally intentional. This is our first attempt to communicate and accept other spirits in an astral plane, we choose our music as "the medium" for it, just take a look on the lyrics and the titles... all that 'Emanations', 'Pendulum', 'Devout Effusions' and the mighty 'Hypnosis' are part of this first session.... In The Mastery of the Unseen, we explore some artifacts used for those themes, such as the Ouija board and the trumpet of the spirits, and I think with that, we close the cycle dedicated to these paranormal topics.

Is "Attunement to Death" a thematic continuation of "Seance Part. I" or "The Mastery of the Unseen"?

Not really. In this new EP, we try to explore more traditional themes such as the first rituals in mirrors, secret languages and some interventions as a form of possession. And it is in this last subject, in which we are investigating more deeply. Our next material will be focused on ancestral techniques of self-hypnosis and possession, especially those used in dark and unknown tribes without intervention or aid of pseudo "spiritual" books. It strikes me to be able to understand this type of thoughts of ancient cultures and how they were revealed to them. And now, that offerings, sound patterns or mantras are (in some way) being replicated in the black metal.

Is "Attunement to Death" connected to any member/s on a personal level? And how much so?

Of course, our music will always be connected to our soul, lyrically and metaphorically some tracks are inspired by personal experiences, in my case the song 'The Officiants' marks a path and vision to follow for our future.

How much more challenging was the writing and recording process of "Attunement to Death"?

So far they have not been so "stressful", we have taken the necessary time to analyze every detail, before recording, our ideas were flowing rapidly, and we were able to consolidate these tracks during the year 2018.

We recorded in the same studio (Equinox Media), under the same supervision, so the process was relatively easier, (although there were 5 tracks). Obviously we spent more days and the guitar process consumed most of the time, mixing and mastering were relatively fast, since the studio managers know about the sound and style we play. 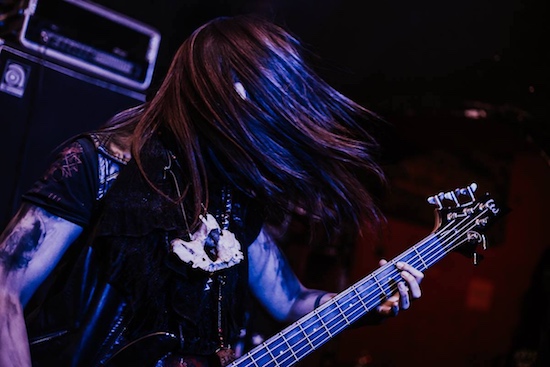 Were there any mishaps/frustrating incidents/disagreements during "Attunement to Death's" recording?

The biggest problem we had was in the process of our art, and although it is true, the idea was always in mind, the artist we chose could not finish on time. Right now, he is still working on another idea, I hope he can finish the work for the debut album. We changed the concept a bit by focusing on a particular song, but I think Abomination Hammer did a first level job and we are completely satisfied with the result.

Who is responsible for mixing and mastering the album? There is a noticeable step-up in definition from prior Invocation material.

It was performed by the same person (E.B.) at Equinox Media Studios, and our requirement was obviously to improve the previous process, and I think it was achieved. I like the sound achieved on the guitars and some drum details that can be clearly heard throughout the mini album.

What was the recording lineup for "Attunement to Death"?

How were pseudonyms selected for the band members and what do they represent if you are willing to share?

The augury was revealed after the band began to reach more people and more specifically after our first live performance. We are not looking for a false fame or attitude regarding our position (of "musicians"). Within a circle of characters without honor, nor do we want to be pointed out as a parallel project of such a member, that is why our identity or ego is taken to the slightest even passing to a third level. For us the lyrics and music must be a priority and it is what we really care about. By spinning finer and answering your question, our drummer is governed under the perception of Clairaudience since he is able to perceive unusual sounds and ideas that we shape in our composition process, as well as Clairvoyance, when thinking and deciding sharply against a new composition or situation in which the band is.

Who handled the artwork on the EP?

The artwork was made by Abomination Hammer, guided by our idea of representing one of the tracks on the front cover. He has very interesting works and a unique style. The first thing that we saw in his Instagram profile was a terrifying and shocking art that caught our attention immediately. It was far away from the most abstract paintings and repeated drawings of goats with bullets. As I said before he did a first level job.

Thus, how important is the artwork on any Invocation album?

We take special care on this subject, since it is just as important as music and lyrics. It is a matter of seriousness and good taste. It is one of the things we want the public to contemplate in the best way. As old metalheads we love when a good album contains a good art. It is a unique experience. 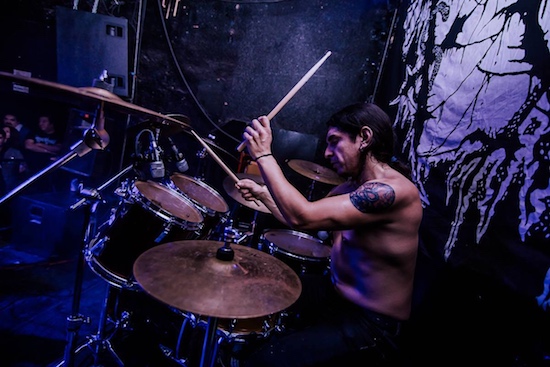 "Attunement to Death" has deeper compositions it seems; track structures are less linear and have an added set of overtones. Was this evolution premeditated or natural?

I think it was both ways, we have been developing and polishing our sound and compositions throughout these years, but personally I think that the best is being prepared for our debut album. Even though Attunement to Death is an excellent paver, we are exploring even deeper themes, sounds and structures that we have not accomplished yet. We are really working hard to get the best possible result, so we just have to wait.

Black and death metal play definitive factors in the music Invocation makes. What is/are the reason/s behind merging the two styles?

It's all about our music inspiration. We're very influenced by the old South American sound and image of Vulcano, Mystifier, Sepultura, Sextrash, Bestymator, Mutilator, Expulser, Dorsal Atlantica, etc. mixed with some foreign death and black sound of Demoncy, Teitanblood, Cultes Des Ghoules, Pseudogod, Necros Christos, Dead Congregation, Embrace of Thorns, Grave Miasma, Temple Nightside, Malthusian, Possession, Irkallian Oracle etc. etc. Anyway, Invocation's music has their own vibe and atmosphere, these two elements in communion with the artwork create a formidable mix. In that our listener can experience all the magic of sound and can be transported to different ways in search of the correct entity.

What philosophical works serve as direct inspirations where Invocation's music is concerned?

On a personal level I could name some works, but this time I will keep them to myself although in the band in particular we are always exploring new lands and everything that is new knowledge is always well received.

Describe Invocation's experience in the Chilean extreme metal scene, what sentiments have you been garnering thus-far?

The scene of Chile is very strong at the moment, although we feel a little apart from the "big producers" and mediocre rats getting easy money. We know who the people are, what they're worth and who really works for the underground. We are not fooled. Anyway, I think we have reached the right audience. In the first years as a band we could play in almost the whole country and accompanied by very good underground bands, so we formed a good fan base, however, our goal is always to look beyond our borders and last year we achieved it by playing at the Total Death over Mexico Vol II festival. We are thinking of accepting invitations to other South American countries such as Peru and Bolivia and Brazil so (unless it is a good occasion) it will be difficult for us to return to play regularly in our country.

Apart from your involvement with Invocation, what other professional/non-professional interests does the band engage in?

We all have regular jobs of course, but personally, I have some institutions working for the underground. I am in charge of a small record label, distro and 2 fanzines among other projects. Our bassist is in charge of "Burning Tongues" fanzine and all the band graphics via "Somnus Arts". Our drummer has his own rehearsal room / studio where he houses the city's new underground bands. In spite of everything, we are somehow very committed to underground metal.

Thanks for taking the time to do this interview with MetalBite please have the last say...

Thanks for your interest in the band and remember, there's no light, only pure hypnotic darkness…