Rarely does an extreme metal band drop out of nowhere with a fully formed sound, and then you get Cult Burial. This London group quickly showed that there is a lot more than meets the eye on their self-titled debut, coming hot off the back of a well-received two-track EP titled "Sorrow". Simon Langoford's compositions pair effortlessly with César Moreira's varied vocal delivery - potent growls and twisted snarls collide with the daring range of styles employed making base from black/death metal and incorporating the crushing low-end of doom, some old school death but also doses of post-metal and even venturing into progressive territory. It's scary to think what Simon will do next. 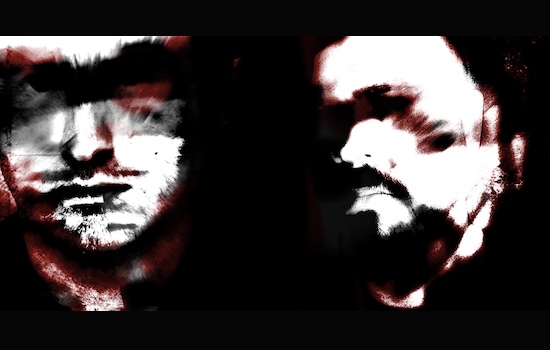 Thanks for taking time to do this, how are things in Cult Burial camp at the moment?

Everything is rosey, thank you.

When trying to find out more about Cult Burial I've read that it was born in the beginning of 2020 after some extensive bourbon tasting, was it a specific brand that triggered the idea of creating a band?

Great question. The brand in question was Woodford Reserve. I'm considering approaching them for a marketing deal, where they basically send me free bourbon, I drink it and then tell people how much I enjoy it.

March brought 2 track EP "Sorrow" and you released a self titled debut in November, talking about productivity!! How do you work on new music and what is your biggest motivation (except for bourbon of course)?

It starts with a chord progression or a riff and gets built up from there. Motivation wise, I'd never made heavy music before Cult Burial, so just to keep making the tracks as heavy as possible was the main driver. The question was always 'can I make this heavier somehow?'. The answer was usually yes.

Cult Burial is a brand new creature but I also couldn't find much about your past. Album kicks ass (no denying!!) and all music was written and recorded in 2020!! Can you tell us more about the creation of the band, the music and the album?

Yeah it was all written in 2020 and mostly during the lockdown. I wanted to make a heavy band and started writing music. I found Cesar and loved his band Enblood and contacted him to see if he'd be interested in doing some vocals. He was, and some tracks were recorded and Cult Burial was born. The rest came together pretty quickly and the album was written in 3 months.

It's going to be quite different I think. It's about half finished right now and the direction is either short, brutal songs like 'Dethroner' from the album or longer, more diverse pieces, more like 'Chaos' from the album. There's going to be more experiments with breakdowns and trying to incorporate more styles.

How proud are you of the Cult Burial?

Fairly. I didn't expect it to be as well received as it was. It's made some people's end of year best of lists, which is amazing considering the short time we've been around.

I have listened to your new record more than a few times already and I'm impressed at the level of detail you were able to place into songs. With two people in the band, how do you work out those situations where you do not agree with each other, where one's vision is different from the other?

Each component of the track is not particularly collaborative. It's more a case of: "here's a piece of music" and then "here's the vocals for that piece of music", and it just works.

For people that are reading this and didn't hear the album what would you say to them, how would you set the stage?

The artwork was created specifically for the artwork by Legerdemain. I was looking for someone to create a piece and came across his work, and fell in love with his work. Anyone reading should check out his fantastic body of work.

How does it correspond to the music and lyrics on the album?

The image to me conveys hopelessness. That's a theme that runs throughout the record.

What exactly is it, what are we looking at?

Honestly: I don't know. I know, however, that I like it.

For me personally, one of the most impressive elements on the album is the atmosphere. Combination of death and doom with some post and prog thrown in gets to me and is simply addictive. As soon as the album ends I want to (and usually do) press 'play' again. What was the most difficult obstacle to get through when composing and recording, which song gave you the most ass kicking and in the end, what did you fear the most and it turned out to be the easiest?

Thank you. The writing of the album came together pretty quickly, and I do know what you mean about musical obstacles, but there was none of those with this record. Everything flowed fast, and if it didn't, it was cut pretty quickly. The biggest fear was on the mixing. The record was mixed at my place and each track was mixed 4 or 5 times before getting comfortable with how it was sounding. I wanted in your face guitars and upfront drums that didn't take over too much, and it took me time to get there.

Most people think that metalheads only listen to metal. What is your opinion about this statement and how open are you yourself to different kinds of music?

I actually don't listen to much metal. Since Cult Burial, I'm listening to more, but historically I'm into anything atmospheric. My favourite record I think is by Portishead. I adore Massive Attack. Last year I was listening to Daughters and You Won't Get What You Want almost non-stop. I hope metalheads aren't only listening to metal, that would be a shame.

I love the Garea album (as do most people), it's an incredible record. There's Almyrkvi/Ruins of Beverast split out earlier this year which I am obsessed with. Napalm Death's 'Amoral' was the least Napalm Death track there's been for ages, and it was amazing. I loved the Regardes Les Hommes Tomber record. I still listen to Deftones' "White Pony'' every few days, it's a masterpiece.

What are the plans for the future?

Album two is being written now. I just moved house so my home studio is in bits....when it's back together I'll get back to writing more songs and I hope to release an EP or album in 2021.

Last words are yours. Thanks for your time and good luck with everything.

Thanks for your support MetalBite! Wishing you all the best for 2021.