The Eastern European countries are always good for a metallic surprise. For example, the Ukrainian band Arhat recently released their debut album "Dead Life". Ukraine, one thinks (at least I do) first of the conflict with Russia, musically rather of black metal. But far from it, the band plays excellent thrash metal, paired with some groovy elements. I asked the guys if they would like to give an interview for MetalBite and their vocalist Alex Sitkoff answered my questions. This gave me the opportunity to get to know the band better and also to exchange a few words about the above mentioned topics. 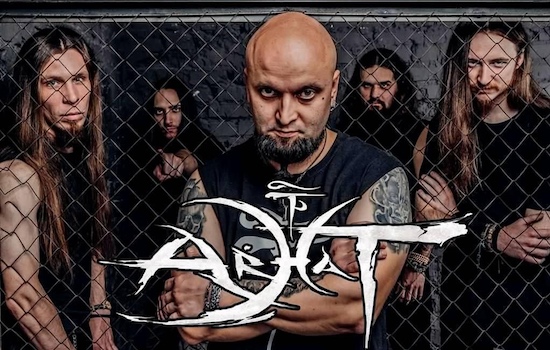 Hello Folks. How are you?

First of all, congratulations on your first full-length album. As far as I know it got mostly good reviews. Did you expect so much feedback?

Thank you! We didn't expect the album to get so many good reviews. Of course we tried to record as best as possible. Carefully approached the creation of the sound. But the reviews exceeded all our expectations.

There is very little to find out about you on the internet. Can you introduce yourselves to our readers a little bit more?

We formed in 2017. All musicians already had experience of playing and performing in other bands. We wanted to play something powerful and heavy. As a result, we chose such directions as groove and death. Two years ago we recorded a demo and started working on a full-length album. In 2018 we released the single Stately Ruins. The single helped us shape the overall sound of the future album. Also we were giving concerts in different cities of Ukraine. We attended two metal festivals - Black Sea Metal Festival in 2018 and United Metal Festival (Belarus) in 2019. December 23, 2020 - We released our debut album Dead Life.

You combine a lot of styles in your music. What are your main influences - musically and lyrically?

We are inspired by bands such as: Hatebreed, Nile, Sepultura, Pantera, Slayer. There are also many more metal bands, we can list for a long time). Also inspires the world around us. Inspires the ancient myths and legends. "Inspires" a society with idiotic rules and prohibitions. Self-knowledge is also an inspiration.

You deal with both real and spiritual themes in your lyrics. Are there certain things you want to tell your listeners? It seems to me that your music is a cultural fusion of the Western and Eastern worlds.

The main idea we want to convey with this album is to always work on ourselves. Self-improvement. In our opinion, the search for harmony is the goal that humanity should pursue. But of course you have to start with yourself.

Until now I knew the Ukrainian metal scene through various black metal bands. What about death and thrash metal? Are you an exception or is there also such a scene in your country?

We are no exception. Our scene has a death, groove and thrash bands. Black metal is more popular among metalheads. We also love this genre)))

What other bands do you have contact with? Maybe you can recommend some bands that you should check out...?

To what extent has the conflict with Russia influenced your songwriting? The whole thing has been going on since 2014 and despite international (half-hearted) attempts at mediation, not much has happened.

In our songs we have never touched on political and war themes. But for us the topic of war is of course very painful. The time will come and Russia will answer for all its crimes. Evil will not go unpunished.

Here in Western Europe, this whole story has pretty much faded into the background, at least since Alexei Nawalny was sentenced to prison in Russia. How do people in Ukraine now deal with this conflict?

Navalny once supported the annexation of Crimea. Let him now receive in full.

What would you wish for a solution to the conflict?

The conflict will be resolved when we regain our territories and Russia compensates for the damage and it is held responsible for its crimes in The Hague tribunal.

Let's get back to your music - you formed in 2017. Have you already had international concert experience? Are there any plans to go on tour when the situation allows it again?

Yes, we visited the United Metal Festival (Belarus) in 2019. It was the first foreign festival. We have completely dedicated the year 2020 to recording Dead Life. In the future, after Covid, we plan to attend foreign metal festivals.

What are your hopes for the still relatively young year?

We hope that 2021 will allow us to hold concerts in Ukraine. We plan to know the music video for the song 'Freedom' and actually writing songs for the second album.

Finally, the last words belong to you!!!

Listen to metal! Remember who you are! Stay True!