Hudu Akil's Zac Crye set to release "All The Same" EP on April 16th, 2021. This sophomore release is a five-track stoner/hard rock EP with psychedelic elements to accent. It was solely composed and recorded by Zac and it's a full demonstration of his musical fortitude and songwriting prowess that takes you deep within the realm of Zac Crye! "This ain't no obsession, this is possession of my soul." a blatant warning from the track "Possession," off of Zac Crye's debut, 2013 EP, "Three Finger Lid" says it all about what you can expect from it. 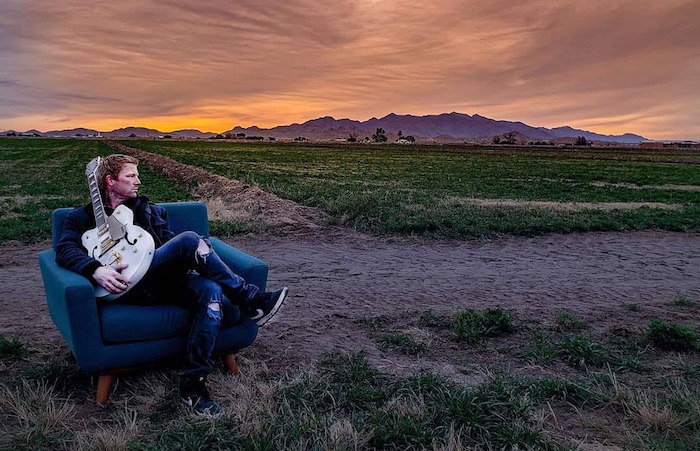 Thanks for taking time to do this, how are you doing right before the release of the new album?

Things are going well prior to the release. I'm really picking up some traction on my socials, I've got a great PR guy who is helping me get my music to the right ears. I've just released my second single, "Look Out Above", and I've already been in the studio recording a follow up album.

No reason to stop when everything goes smoothly right?? Let's talk about your newest album though, tell us a bit about the creating process?

This current project is unique because it's just me playing all of the instruments on the album, so the recording process took just a little longer than usual, but it was still a blast. I've been making one-man-band recordings at home for years, so it was great to take that process into an actual studio. I'd had the songs written for a few years, so I knew them well. We knocked out the entire album in 2 back-to-back 8-hour sessions.

How long did you work on the new album, can you tell us about the recording itself, where did it all happen?

The songs have been written for a couple of years. I've always got songs on backlog. So, when I got in the studio, I knew just how to record everything. I recorded at Another Smooth Mix studios in Yuma, AZ with Adrian Matthews who mainly works with hip hop artists. His studio is not sized for a rock band, so the first thing I did was the drums. I moved my drums into the little vocal booth and cranked out all 5 tracks to a click track. Once that was finished, we moved the drums out and repeated the cycle for each remaining instrument with the vocals last. I love recording in the studio and trying out different ideas. I also enjoy working with different engineers, especially someone like Adrian who's forte isn't rock music so he brings some outside perspective, and I could tell right away upon hearing the mixes for the first time. I'm totally happy with the final product.

As someone who has been a headbanger for years and years, I will say that this is a bit of a mellow album, but there are very heavy subtleties to found throughout this record. I made sure to include something for all walks of the hard rock spectrum.

How did you decide on a title?

'All the Same' was actually the last song I wrote that really tied in with the whole collection I chose for the album, and it's what made me decide to go in the studio. Lyrically, the song is pretty much about submitting your will and accepting your fate. I thought it made for a good album title considering its all the same person on the album.

How do you work on new music?

I just fuck around on the guitar until I come across something that catches my ear and then the whole song just kind of explodes out of that.

Were there any non-metal influences that surprised even yourself?

Absolutely. I have a ton of non-metal influences. My focus is on blending and bending those styles to make something unique, mellow and heavy at the same time. Subtle Heavy.

What do you think about categorizing and putting tags on music?

We've been referred to as stoner rock, and while it's my favorite genre of music, the term was a lot cooler when I was in High School ya know. Now I'm a grown man telling people I play 'stoner rock,' and it's got this stigma attached to it. It's a little silly as well considering that 'stoner rock' is basically an umbrella term for the resurgence of 70's-based hard rock music.

What would you call it yourself? What does it mean to you?

Around my peers - stoner rock. But to outsiders, I call it desert rock. Desert rock and stoner rock are closely related with stoner blending with doom on the far side and opposite that - desert rock kinda bleeds into grunge rock. I think the band that really kicked off the genres would be Kyuss which is the perfect blend of both elements and then if you get into the bands they were surrounded by like Yawning Man, Fatso Jetson, you really start to discover the essence of desert rock which is usually slower and more mellow but with huge riffs and usually very epic song writing. Big Scenic Nowhere, Green Leaf, and Stoned Jesus are some prime examples of the newer desert bands.

I do it for myself, but I also do it for others. I've got a whole archive of shit I've written. Some of it I feel like sharing and then other stuff, I know I just wrote that for me.

I have no expectations, but I hope that they enjoy the music. I think there is still space for music that is not overly produced, mass-formulated, over-the-top, and just shallow like we hear on the top 40 all day. I think the average listener deserves more credit.

I love this question! I think the final step in any creative process is to destroy what you create. They call it "killing your darlings." I'm building this thing so I can destroy it later, and in that way, it can be preserved. I would hate to just rest on my laurels. You need to 'burn after reading,' in order to keep the real spark alive. It's like a comic who goes on stage and does the same material for 20 years - you will get left in obscurity for not killing your darlings.

Mainly, the emotion I feel most often is like "what the fuck," because there is so much about our reality that is ass backwards and just doesn't make any sense at all. Sometimes it feels like that movie, "They Live." I suppose I could use a little more, "who gives a fuck," emotionally.

I'd probably have a lot more money! All jokes aside, I always thought I would've gone into psychology or addiction therapy, but I feel a nudge toward marketing and business, I enjoy working on different forms of media - film editing, audio engineering, etc. My main hobby outside of music right now is my podcast, Jamspace with Zac Crye.

Where do you see yourself and the band in the next 5-7 years?

I hope to get my band members centralized here in Phoenix because we are spread across the country at the moment. I just bought a house in the valley - I've been living about 45 minutes outside of Phoenix so being more accessible is going to help a ton. I'm going to focus on being a part of the scene here in Phoenix like I have been unable to do the past 3 years I've been around, and to keep writing music and moving forward. I'm releasing this album on vinyl as a split with my band Hudu Akil's self-titled EP, and at the same time I plan to press Hudu Akil's most recent release on an LP, and I'm in the studio finishing up a solo LP. That's three LP's I'm trying to get pressed up to launch my own label, Jamspace Records. By the time all of that is in motion, I plan to be working on new Hudu Akil material and maybe strike a distro deal outside of my own label. I've got some friends in a really cool unknown band that I would like to put out as well. I think in the next 5 years, I could have a small label with a few artists that I really care about and enjoy working with.

Since you mentioned vinyl releases let me ask you this: labels and bands release their new material on CD, vinyl and cassette. What is your opinion about the physical media, which one do you prefer?

Definitely vinyl. I think the cassette thing is cool, but it isn't a great format, and I don't know who is buying CD's anymore, but I certainly don't. We're not even sure about releasing our stuff on CD at this point. I think vinyl stands tall because its a great physical format. You've got the big artwork, the pure sound, and you can't roll a joint on an mp3.

Just wanna say thank you guys for reading and taking interest in my music. I hope you enjoy the tracks you can follow me on social media, I'm most active on my Instagram @zaccrye and Bandcamp fan page https://zaccrye.bandcamp.com; if you follow me on Bandcamp you will get exclusive track premiers, discounts on merch, and be the first to know about any cool news coming down the pipe. All the Same EP drops 04/09 on Bandcamp and everywhere else 04/16. Pre-orders are up now for just $5 on Bandcamp.