Bushido Code play death-thrash combo that is spiked with just the right amount of groove and hardcore. After listening to their newest album called "The Ronin" I have to say that I cannot wait to see those guys on stage and watch the place being torn apart. Before that happens though I had the chance to ask some questions and Mike Ledet was in the mood to give me some solid answers. Play it loud, read the words and visit their sites. Sayonara. 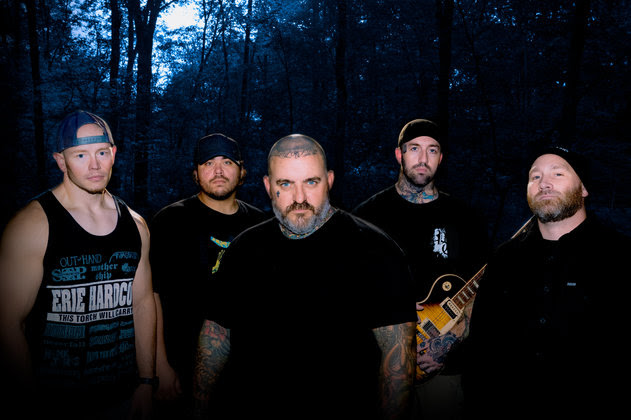 How's Bushido Code doing right after the release of the new album?

Things are great here in the Bushido Code camp. With the album release and the response, we have gotten on the singles and the video so far, we are excited! To say the least.

I don't know anyone that's never heard of Samurai, and I know what Ronin are, but bushido code is like inside knowledge, what is it and how did it end up being a name for the band?

Bushido code is the code of the samurai. We got the idea for the name from our guitarist favorite samurai move "Shogun Assassin" and also our respect we had for the culture of the samurai. We loved the idea for the name because of the movie I mentioned earlier. But we also had this crazy idea of turning the band name into this identity that could tell this crazy and bloody story. About a fictional ronin who couldn't achieve death and holding the world accountable to its violation of the code. You know super nerdy metal stuff.

The Ronin is the start of this violent journey we want to take a listener on. Following Da Shi through his quest for death. And a humbling look in the mirror at ourselves.

Sounds really cool. How long was it in creation? Can you tell us a bit about the recording itself, and if you're happy with the outcome?

Well, we had been working the idea for a while but the writing and recording process was about 6 months. This one was a great experience recording because we all went to the studio together and we were just in the pocket. Just hitting on all cylinders. It was definitely one of those weird cool feelings in the studio. It was like nobody was saying much but you definitely felt it was something big going on. Well, that's at least how I felt pretty sure the guys felt the same way. We couldn't be more than satisfied with his outcome. This is one of the best productions we've ever done. I think one of the best records I've ever recorded.

What can head bangers expect when they press 'play'?

A brain shattering experience that will destroy all their senses. No, really sonically this record is on point. And the lyrics are fun and interesting. If you like metal, you will like this record.

Was watching samurai movies and drinking sake your main inspiration or was there anything else?

We wanted to do something different but something that was grounded in the music that we grew up listening to. We wanted to play metal, but I wanted to give it life. Like the bands we loved growing up. But keep it as brutal as possible. I remember going to the studio and Derrick had done the music for 'Prelude To Battle'. It's an instrumental that's on the record. I remember just wanting to listen to it over and over again. It just didn't need words. The music spoke to me made me feel peace and the build up to chaos. I still find myself listening to it just to get that feeling.

Who do you have in mind when you work on new music, are you writing for yourself or for others?

I truly believe it's one and the same. I don't think there's a way for you to create for yourself and not give it to others. Not if you're playing music. The idea is to be heard. For me, I've always wanted to give back. Music changed my life; it's saved my life. So, for me it's always been about giving it back. And in that way, it is for me.

What do you want from the listener?

Just an opportunity. An opportunity to share our music with you. And if you like it great and if you don't like it thanks for giving us a shot.

That's a good question. Let's say destroy the system but build the people.

Which emotions do you have a plenty of and which not enough?

Wow! we're getting deep in this one huh. Let's see. I have a lot of rage and anger. Not enough patience and compassion.

What would you do if you could not play?

I'll be dead hands down. The way I grew up music is the only thing I had literally.

Where do you see yourself and the band in next 5-7 years?

Well, the plan is to take over the world. But until that happens, we're just gonna keep playing shows and putting out records. I'm making cool ass T-shirts. I mean who doesn't love a cool ass T-shirt. No seriously I've been playing music for 25 years and I'll keep playing till the day I die. That's always been the plan so we're going to keep working on new songs putting out an EP next, I think. And getting out there and playing as much as we can and hopefully get to Europe. Maybe when this pandemic goes away.

Categorizing and putting tags on music gets annoying sometimes and yet its needed, or is it? What is your take on it?

Vinyl is coming back some say but for me it never went away just like cassettes. What is your opinion about the physical media, which one do you prefer?

I personally want this record to be on vinyl so bad. I think it's something I will come out later for sure but they're so expensive the press but worth it in my opinion. Now we will release them cassettes, but I've never been a fan of them. Because when I was coming up that's all there was, and they were annoying. But now I think they're pretty cool as a band to put one out. I just like seeing the record in different formats. So, I'm a big fan of vinyl. And OK fan with tapes LOL.

Thank you, guys, for giving us the time to talk to you. And for the reader out there if you liked what you've read, please check us out and give us a follow on our social media. As a matter of fact, give any band you like a follow on their social media. It helps all the bands out these days and people sleep on that.