Nuclear Winter is a one-man project of Gary Stautmeister and that is not anything unusual nowadays but coming from Zimbabwe is something else entirely. Gary and Nuclear Winter have some titles under their belt since project is in existence from 2011 but the newest one is what grabbed my attention. Brand new full length is called "Greystone" and it's an album that combines industrial rhythms with death metal riffs and throws whole bunch of melodies into the mix. I had few questions sent out to Gary and if you want to find out more about the band, the man and the music then just keep reading. Playing Bandcamp link is also recommended. 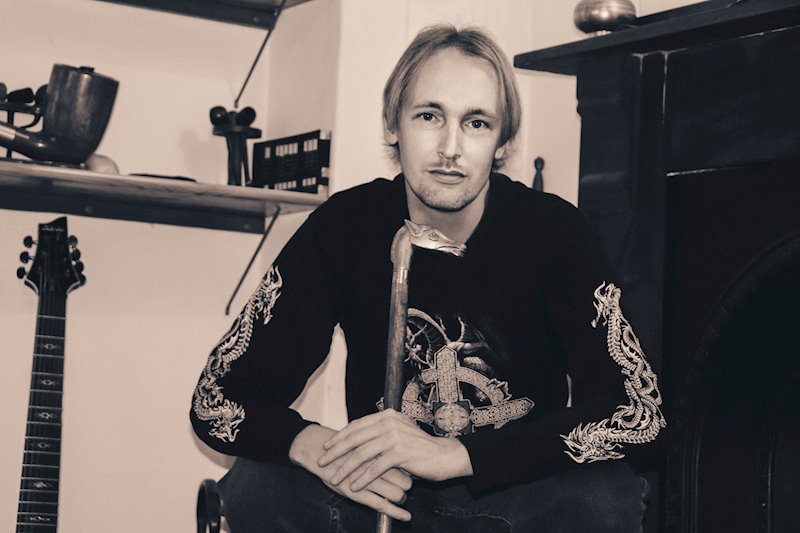 Thanks for taking time to answer a few q's, how are things?

Things are good, thanks. I'm pleased that my new album came out on the 21st of May, and I've also recently done a cover song of Motley Crue's 'Wild Side' which is out now as a free download. I was going to try and make the cover more electronic, but it just wasn't really working - so in this case less was more.

Nuclear Winter is a cool name for a band, what inspired it?

I was looking for a name that represented the idea of an apocalyptic or post war landscape, and Nuclear Winter seemed the best choice for this. It was mostly a process of narrowing down a few names that sounded "metal" with Nuclear Winter being the one that stuck. Plus, I liked that it's an easy name to remember.

Album is out so let's recap the making of it. How long did you work on it, how was the recording and the whole process, are you happy with the results?

This new album was actually done fairly quickly. I started it in March last year and had it completed by January this year. With the lockdowns I found I had more opportunity to focus on the recording and also now I try to get the songs done while I have the inspiration. Previously I would work on my music sporadically and found it difficult sometimes to get back into the same head space to complete the songs. Having said that there's always songs that become difficult to work on. 'The Harvest Moon' was one of those songs. I did the main chorus first and had no idea what to do next. But then it's a case of experimenting and sometimes simplifying things and it starts to come together. Overall, I'm very happy with how the album has turned out. Also, each song has a slightly different guitar, drums and bass sound so I had to make sure the overall tonal balance between all the songs was similar in the end, but I think the production came out well enough.

How do you compose and what inspires you?

I find I have to be in a relaxed and stress-free frame of mind to make music. Even though the lyrics can be quite dark and the music itself quite intense, I can't use anger/frustration etc. to be the driving force behind what I produce. That would be like feeding that negative energy. The songs rather are a 'story' that represent those heavy topics. I've always enjoyed electronic music so that finds its way into my music and I like lots of random nonmetal stuff, but the only thing that really surprises me is the amount of metal I don't actually like.

What is the meaning of "Greystone"?

I chose Greystone mainly because it has a nice ring to it for a metal album, and also, it's non-specific, so because the album doesn't have a specific theme it worked well as a generic title. Some of the lyrics refer to 'grey', so that is the main link to the title.

I think this is my most 'solid' album so far. I think it's more focused than my previous work, with a little clean singing now, but still not losing any of the heaviness from before.

Some guys out there like to put tags on bands and so you ended up with 'modern melodic death metal'. What do you think about all this categorizing and putting tags on music?

The term modern I guess means there's more clean singing and more synth sounds - so it's just adding those elements to the melodeath genre. I think it's a good idea as long as it doesn't get too silly. I like to be able to search for e.g., symphonic black metal or industrial death metal. But when you start seeing things like epic blackened power folkcore then that's a bit much.

Who do you create for and what do you want from the listener?

Definitely for myself, but also with the hopes that some people find it entertaining or impressive. What do I want? Nothing really. I just hope they enjoy what they are listening to and if they have any constructive criticism, I'm happy to hear their thoughts on it.

Which emotions do you have plenty of and which not enough?

I feel I'm generally quite levelheaded and don't think I have either of those extremes, but if anything - maybe a bit more contentment and less anxiety would be good.

What are the plans for the future?

I don't have a set plan, but I'll continue to work on music when I can and on refining/improving my production process. Living in Zimbabwe is very unpredictable so generally planning for the future long term doesn't really work here - so where I'll be 5 years from now. I don't know, but as long as things are moving forward that's the main thing for me.

What is your opinion about the physical media, which one do you prefer?

Here in Zimbabwe tapes and vinyl are not even thought of so the only physical media we have are CDs which actually are my preferred media, mostly just because of the durability. I've got a bunch of old vinyl packed away from when I was a teenager and they've all not been played since then.

Thank you for the interview and also to anyone who is interested or supporting in what I'm doing.