Skraeckoedlan is the old Swedish word for dinosaur and the size of the riffs and sound of recently re-recorded "Äppelträdet" are a good match for the name. I had a chance to ask Erik Berggren (bass) some questions to conduct a quick introductory interview to get the word out so check out the music and keep reading to find out more about the band and their old and yet new album "Äppelträdet". 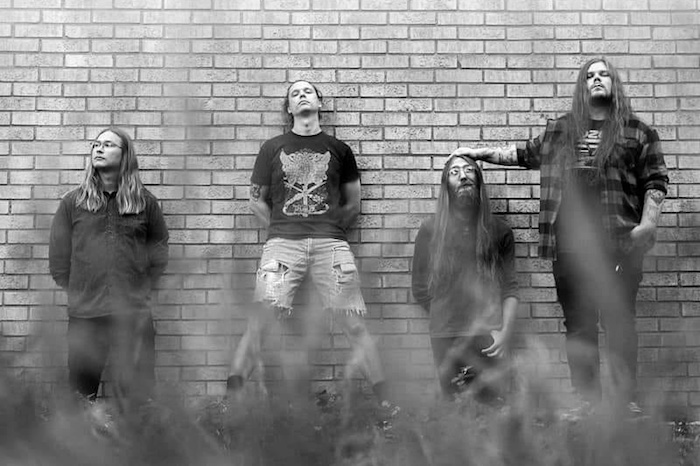 Thanks for taking time to do this, how is Skraeckoedlan nowadays? How're things going?

Things are good. We are itching to get out and play live again like all bands probably are. Fingers crossed that can happen soon. Right now, we're excited to get the 10th year anniversary release of Äppelträdet out to people.

Let's talk about "Äppelträdet" then. What's the idea behind a re-do, how did it happen, what was the inspiration for it?

Well, this is a re-release of our first full length album, 10 years after it was first recorded. However, we did go back and re-record some songs. Almost all of the lyrics on Äppelträdet are in Swedish except three songs which have English lyrics and Swedish titles. We hadn't really committed to singing in entirely in Swedish 10 years ago, so we chickened out and recorded three songs in English. Now we've re-recorded those songs with Swedish lyrics and English titles. Recording these new tracks was really fun. We went and spent a couple of days living in a studio in the countryside run by one of our good friends. Anytime you get to do something like that is a blast and being so fully immersed in the creative process is always rewarding. Re-recording the English songs took about 4 days. We're very satisfied with the result. The session went really smoothly, no major technical issues and we're all happy with our performances. It's nice when things turn out like that for a change. Our main inspiration when re-recording the English-language songs from Äppelträdet was to bring the songs of that era into the sound of the band today. We've all evolved as musicians and writers in the time since the songs original release, so it was exciting to apply that. It's interesting because there has been a non-metal influence. Swedish bands like KENT and bands like WEEZER have played a role in the band's sound since we started. When we re-recorded the English language songs we were somewhere between Fu-Manchu and Björk.

What is "Äppelträdet" and how do you want it to be seen?

The title "Äppelträdet", which translates into Apple Tree, is a metaphor for the perseverance of life. In the post-apocalyptical word where the album takes place the only thing that still grows in the ruins of the world is an apple tree.

Since we got to translating and explaining I may as well ask what is Skraeckoedlan and what inspired name of the band?

Skraeckoedlan is the old Swedish word for dinosaur. The literal English translation would be something like horror-lizard or terror-lizard. It's hard to say 10 years down the line. The name was already decided before the band started. Skraeckoedlan simply felt good. It also lent itself to a lot of good visual language and imagery that felt musically inspiring

You've been tagged with 'stoner metal', what do you think about categorizing and putting tags on music?

We understand that they are to an extent necessary. It makes it easier to communicate what a band may be about. If you like the sound of a certain "genre" the labels and tags can help you find new artists doing similar things. However, it can be reductionist for bands and artists that make music that crosses traditional genre boundaries. The labels you get ascribed by other can sometimes feel diminishing like "Hey man, we're more than just that".

What would you call it yourself, what does it mean to you?

"Fuzzience fiction rock" is the best we've been able to come up with. Often times our music is meant to be a sort of escapism. The music should feel like it's taking place in a sci-fi story.

When in creative mode, do you write for yourself or for others?

We create first and foremost for ourselves. At the end of the day, we want to have an artistic statement that we are proud of. However, everything we create we want to share with people. Either by playing live or releasing records.

What can listener expect from "Äppelträdet"?

Expect heavy chunky riffs that sound like they come from space all sung in Swedish.

I think to expect something from listeners is to have it backwards. All we can do is create music that we are genuinely proud of. If people connect with it that's great. If not that's fine. It's not fair to put any expectations on the listener beyond that.

Do you play to build or to destroy, which emotions contribute the most?

We play to escape mostly. I guess we have plenty of most emotions, otherwise I don't think we would the need to keep doing this.

Where do you see yourself and the band in the future, is there a plan in motion?

The plans in motion are simple: to hopefully keep growing the band because we would love to keep doing bigger and bigger shows, keep making music we are proud of and keep playing it in front of people.

CD, vinyl or cassette. What is your opinion about the physical media, which one do you prefer?

I love the combination of physical media with all the various streaming services today. It's the best of both worlds. But out of all the physical media I prefer vinyl simply for the ability to get really detailed with the artwork on the sleeves.

Hope to catch you on the road soon and hope you enjoy Äppelträdet.