After releasing 3 albums (2 LPs and 1 EP) in little more than 12 months there should not be many of you that haven’t heard of this band yet. With their 3rd full-length, "Symphony For The Devil", Witchery continues its rock/thrash path and once again prove that ‘retro-metal’ can sound fresh, innovative and entertaining. While so many bands try to turn and twist their songs in any possible way Witchery takes completely different approach and drives its music on clarity and simplicity. Bass player, Sharlee D’Angelo shares his view on the ‘retro’ tag, their music, lyrics and problems with release date of new Arch Enemy "Wages of Sin".

After releasing your first 3 albums in little more than 12 months, the fourth one comes after almost 2 years; what took you so long?

It was actually a combination of a lot of different things... between the first few albums we haven’t done that much touring and we decided to be more a real band and start playing live rather than spending all the time in the studio. Also, since everybody is involved in different things and bands it took us a lot of time to get everyone together in one place at this same time. We were also looking for a new record deal in Europe and all negotiations took like eternity... On top of that our old drummer quit and it took a while until we found a replacement. So, all those things put together made for this long break but I also think it was a good thing and created a little bit of anticipation right there. When we released all those albums in this short period of time it was basically to prove the point that people take way way way too long in between their albums. 3-4 years between the albums??? You wonder why? What are they doing? So, we just wanted to prove that you can write and record albums in fairly short intervals. Look at the bands in the past, they could release two albums during a year and they were touring constantly also. It can be done and we just wanted to try that out. Then we thought maybe it was too much too soon and decided to let the people wait a little for a new one.

Why did Mique leave the band?

It was just a personal thing. The thing is that he’s always been very much into the music side of things like recording and creating music but when it come to touring he wasn’t very comfortable with it because he didn’t like being away from home for very long period of time. He also got a new job, he’s new baby daughter was born and he decided to concentrate more on the family and his new job and I respect that. We could see that he wasn’t comfortable with being on the tour and I’m just grateful for the years we had, he’s still a very good friend.

Does heavy involvement in other projects cause any problems in keeping Witchery together as a regular band?

Yeah, sometimes it’s hard to find the time but we try to make the best of it and plan ahead the best we can. So far it hasn’t been that bad and if you put all the differences behind, it works.

Is everything written by Jensen again?

How long did the writing process go? Did you again need 5 or 6 days to record it like your previous albums?

[laughs] No, this one actually took a little bit longer. It took a better part of the month I think it was done in 17 or 18 days. We didn’t have more time cause we were just like two days away from entering the studio. I think the last riff was written on Friday night and on Monday we entered the studio. 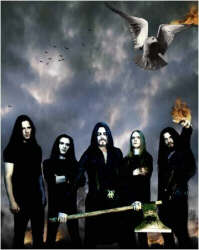 It’s nice to hear about a band that succeeds in playing old-school heavy metal or "retro metal" style. Accept, Motorhead, and Judas Priest influences are visible but Witchery is not just a copy of afore mentioned...

No, we are not. I have to agree with you there and it’s nice to hear you say that but in the past we were not very happy with that "retro" tag. I can understand that because so many our influences come from the afore-mentioned bands and many more bands from that period, so it’s only natural that we sound that way, but it’s not like we ever set out to be a retro band, like, "Oh, let’s sound like this band," it all come naturally since we all grew up listening to this stuff. I think it’s also because of the imagery around it, the cover art, lyrics and all that stuff, but it all just fits the whole thing. It’s just something that needs to be there in metal.

There are moments that songs just seem to be great rock and roll. It seems like you guys simply have a lot of fun doing it...

Oh absolutely, that’s what we based it upon. If we didn’t have that, the band would not exist. That’s what put us together in a first place. The recording of our first album was just like a such a joyous experience, we had so much fun and if we didn’t have so much fun we probably wouldn’t do it because I think that’s very important that it comes through the music. And if you hear the album where it sounds like people are heaving fun playing it then most likely you’ll have fun listening to it.

Is the fun and joy still high and on the same level since you started the band?

Oh yeah, absolutely. I mean there were moments were we felt a little bit of pressure since we had such very good response to our previous albums and of course there was a little bit of pressure to live up to it but we tried not to think about it too much and just do what we always do and write the album for ourselves; the kind of album that we would like to buy that’s not out there and we just have to write it ourselves.

What are the lyrics about? Are they as important as music or they just something for Toxine to scream?

Yeah. [laughs] It’s a little bit like that... they don’t have a message for people. These are the lyrics we think fit the music and of course the lyrics are a vehicle for the vocals so yeah it’s something for Toxine to scream. [laughs] I mean they are good lyrics, we try to have a little bit of a distance, we don’t try to be super-evil or anything, they are just dark fairytales. 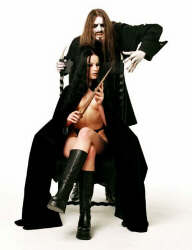 What happened to my favorite nun? Will she again be a part of the next photo session?

Maybe, we’ll see. We’ll see if we can lure here out of the convent again. [laughs]

While I’ve lured you out to make this interview, I have to ask you about Arch Enemy. What the fuck happened with your new release "Wages of Sin"? When can the whole world finally put its ears around it?

Well, this is something you should call your local Century Media office and ask about. It actually has to do with a few differences we have in a contract that we try to resolve and it just drags for so long now... I really don’t know what’s the status right now. The last thing I’ve heard is that it should come out in January, but I can’t really confirm it. I just hope it’s finally going to happen because we re-did the artwork for the US and it will also include a few bonus things on it as well.

I hope so. It’s almost been a year since "Wages of Sin" hit Japan’s stores and it has to be really frustrating to see your work lying on the shelves for so long.

It’s extremely frustrating. This material, when it’ll come out it will be over a year old... It’s bad when it happens like that, but its just politics.