Finally, after more than a two-year break Sentenced comes back and maybe while not as suicidal as they used to be, they are still comprised of enough misery soaked into their latest opus that it will make you think about death more than ever before. Stronger than ever and with excellent compositions, "The Cold White Light" is filled with their best material to date and Sentenced stands tall as 'The Northernmost Killers'. Vocalist Ville Laihala reveals his deepest, but not always darkest thoughts. 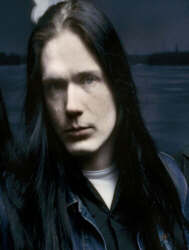 Let me start by asking how close was Sentenced to a break up? After "Crimson" the atmosphere in the band wasn't the most pleasant...

No, I guess we played too many shows, supporting the "Crimson" album and at the end of the last tour we did with In Flames we started fighting with each other and things got kind of ugly so it was either we split up or take a long break. In total we had 7 months off not being in contact with each other that much.

It looks like the break did a lot of good for a band because in my mind "The Cold White Light" is the band's best album to date. It seems like you were able to generate a lot of energy and great ideas because of it [the break].

Yeah, you can actually hear on the album that the band is well rested: there are new ideas lyrically and musically and some even humor is back, us not taking us too seriously. The whole album feels kind of fresh to us; it's like a new start.

Where you so happy to get back together so that it turned out to be the least suicidal-oriented Sentenced record?

[Laughs] I guess so. I mean there is still some depressive elements, there is a song called 'Excuse Me While I Kill Myself', but it's not meant to be taken seriously. We are presented as a suicidal band but I think we are much more than that, we've always been much more than that and that's why that song was taken a little bit over the edge.

Uncharacteristically you even found some room for a black humor, what is up with the mentioned 'Excuse Me While I Kill Myself' or 'The Luxury Of A Grave'? Is it a parody of the Sentenced past?

We like to joke about stuff that you shouldn't joke about, death and stuff like that. It's a way of laughing at death, life and most importantly laughing at us on those songs and not taking everything so seriously. We joke a lot, our humor is pretty dark and you kind of want to express that in our music sometimes. 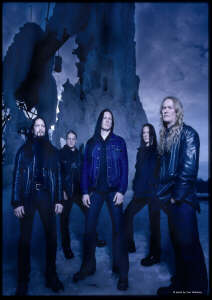 With band's "The Northernmost Killers" tag most people must think that Sentenced is the most pessimistic group of guys, who just think of the varying ways to get out from this world. Obviously impossible cause you'd be dead by now, but just to set the record straight tell me how are you guys in real life?

I guess we try to enjoy life like everyone else we're not living the way that our lyrics are. For us it's just much easier and natural to write about that kind of stuff. I don't know why but it just comes out easy. Anyway, we are like everyone else. I mean, of course we are from Finland where people tend to have a low self-esteem and we have a down way of looking at life, but still I don't think of myself as a suicidal person, at least not yet anyway.

Each album seems to go into a little softer sound direction and although few tracks have a real nice kick, overall "The Cold White Light" belongs more to rock than metal. Is this the direction you want to go?

We don't really want to limit ourselves to anything. We just want to do what feels right for that time. Next album could be heavier or softer but it doesn't mean we'll go into softer songs and we'll know already what we're going to do with the next one. It's just a way we do music I guess.

One thing I can't stress enough is variety of songs on "The Cold White Light". "Crimson" was a great album, but all tracks seemed to be in exactly same mood, type of lyrics and sound. This time you go from rocking, energetic tracks to more melancholic, did you have this in mind while writing this material?

Not really. Because we had this long break everybody wrote the music on their own, at home just playing stuff with a guitar... and when we started rehearsing we found out that the songs are quite different from each other. It didn't bother us in any way we just gathered them together. I think it's more interesting when the album has 10 different songs rather than one song going through the whole album anyway.

A few things away from the band, do you follow career of former Sentenced vocalist Taneli Jarva (The Black League) and if so what do you think of his new band? Do you guys still keep in touch with each other?

Yeah, we're pretty good friends and we know what they're doing. I'm not really a big fan of their music; it's just not my cup of tea but they are cool guys.

Either I missed something or you guys are 100% dedicated to Sentenced only. I can't remember any member playing in any side projects. Does anyone of you have something on a side?

Yeah, I have another band and we're actually recording an album at the moment. I guess it's going to be out in October but I'm not sure yet. 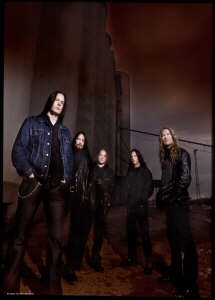 What's the name of your project and in what music direction is it going?

It's called Poison Black and we're going into heavier direction. I'd like to think it's a mix between Ozzy Osbourne, Paradise Lost and Type O Negative. I've been playing guitar for almost 20 years now and I still have an ambition to do that, so I play the guitar in this band. Zakk Wylde is my god with a guitar... You'll hear it.

What do you think of the fact that your new album was available on the net before the release date? In the future do you see this as a reason for bands to go broke and eventually break up?

Yeah and record companies too, maybe. I mean, we have to be away a lot because of the type of the music we do and we'd like to get paid for it cause we have to eat also... You have to put out promo CDs for reporters before you release the album but there can be just one asshole who puts it on the internet and one day it might get to the point that no company will give any promos, just samples of the songs...

Which will not work for the journalists because it's pretty hard to make out the atmosphere and structure of the album based on few second samples...

Back to "The Cold White Light", after so many years in 'the dark' where did this fascination of 'White Light' come from?

There is just a twist of positive feelings from us throughout this whole album and I guess 'Light' symbolizes hope, at least for me. I don't know where does it come from but I became a father 10 months ago and I have a pretty good reason to see some hope at the end of the tunnel.

Thank you very much.

Since everything looks so un-Sentencedly (I think I just come up with a new word) bright, now let's try to switch moods... did you have any problems, anybody pissed you off during the recording process? Anything will do... anything bad. 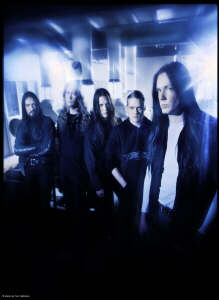 [laughs] I mean I hate it because I'm never happy with anything I do. We were recording in this pretty small studio in our hometown and the room where you sing has this door straight out from the studio. When I sang I felt like I didn't quite get it so I went through the door straight to my car and drove home, while the guys were thinking that I'm still in the booth. They were asking me, 'do you want to try one more time?' I was already on my way home. You suffer for one month but after that when you listen to the whole album you feel pretty good so it's worth the suffering.

What are the tour plans? I guess you won't be planning as many shows as after "Crimson" to avoid another downfall or are you? After all it turned out in an awesome new album...

Two tracks on "The Cold White Light" have titles in you native language. I'm not going to try to pronounce them but can you tell me what do those titles mean?

The first one, the intro of the album ('Konevitsan Kirkonkellot') means 'The Church Bells of Konevita'. Konevita is a historical place in Finland and it's old traditional Finish folk song and we just wanted to put in on the album cause it's really Finish and it fits to our music. This other song 'Everything is Nothing', the Finnish sentence actually translates to 'Time Buries the Memories'. The sentence is kind of a phrase in Finland so it's kind to hard to translate and 'Everything is Nothing' is the closest to the whole meaning of the phrase.

What song is your personal favorite from this album and why did you select 'No One There' as a first single to represent the new release?

We didn't want to put out a typical catchy rock song like everyone else is doing and there isn't a song that gives you a full picture of the album. We all like 'No One There' so, we kind of figured lets put out that for a single and maybe it's not the wises thing to do commercially but we don't really give a fuck about that. If it pisses people off at least they are talking about us. It's promotion anyway. My favorite track is 'Blood and Tears' it's one of the best tracks we've ever written and 'Everything is Nothing' is pretty personal song for me, I like that also. The album is still so fresh to me I like them all.

Since everything went so smooth and Sentenced turned out to be bunch of happy guys you have to end it on the dark side...

You mean kill myself?

[We laugh] No not you, the interview.

I think it can't get any darker than that. [laughs]