Einherjer, musically have crossed to both ends of the spectrum as far as metal quality is concerned with the first album “Dragons of the North” and their follow up EP “Far, Far North”, there were large talks of these guys being the next big thing in metal. Few could argue their potential when listening to these brilliant albums. However after they released the largely indifferent “Odin Owns Ye All”... there was a considerable negative amount of comment concerning Einherjer. Comments were made that Einherjer had lost their way. They temporarily resurrected themselves with “Norwegian Native Art”, but even Einherjer themselves were not overtly satisfied. After a few lineup changes, I dropped Frode Glesnes a line via email, and asked him to give me the lowdown on Einherjer circa 2002. Whilst far from being an in-depth interview, these few questions will answer some of the queries many of you had concerning what is now going on with Einherjer. 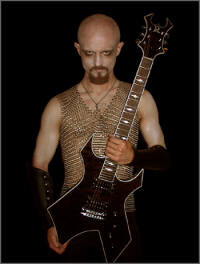 You guys have certainly been keeping a low profile as of late; not really a peep for a year or so? Or is that just me?

No, it’s not just you. We’ve done a few local gigs, but the last big thing we did was the Milwaukee Metalfest in August. Since then, we have been working on new material and did some necessary adjustments in the line-up. The latter demanded a bit more time than we expected, but now we’re just about ready to enter the studio again.

Is it a perquisite if you are a black metal band from Norway that you need to constantly hire/fire members? Dimmu Borgir, Borknagar and now you guys are guilty of it. Ragnar has departed the Einherjer camp and you are now handling vocal duties.

I can’t really speak for the others, but I think that we’ve had our share of line-up changes. I just hope that Einherjer anno 2002 presents a line-up that will last for years. We certainly feel that we’ve grown stronger through the recent change, and I’m positive that our "new" sound will be welcomed as well.

I know you did the 'grim' vocal sections of "Norwegian Native Art", with Ragnar out of the scene, will Einherjer be a completely grim vocal act or are you intent on bringing cleaner vocals into the mix as well?

The grim vocals will be the main vocals, but I don’t see any reason to cut the clean vocals totally. We are a four-piece band and all the members have very different vocals. It would just be natural to use the qualities of the band, in order to create the right atmospheres for the various themes.

With Ragnar no longer a member, will Einherjer remain a three-piece band? I know Thundra’s Stein plays session bass for you, will he remain a solely session musician?

No, since the departure of Ragnar, we recruited some new blood to our tribe. Stein has not played with us since the recording of "Norwegian Native Art". We’ve finally got ourselves a permanent bass player, Kjell Håvardsholm. He is fresh in the scene and he has shown a great enthusiasm for the band.

Speaking of Thundra, I know you guys (from Einherjer) are quite good friends with them, what are they up to album wise? I really did enjoy "Blood of Your Soul".

You said at www.einherjer.com you have strayed from your roots over the last few years. What do you mean by that? Is the deletion of Ragnar the ultimate price for the movement away from the origins of Einherjer?

There is a bit difference between "Dragons of the North" and "Odin Owns Ye All". We managed to collect ourselves during the making of "Norwegian Native Art", but we felt that we needed to take a step further in order to really be 100% satisfied with our sound. We needed the grim vocals. I won’t blame Ragnar for the mess we created. He only did what he was told. The blame is on us. We should have seen this coming. 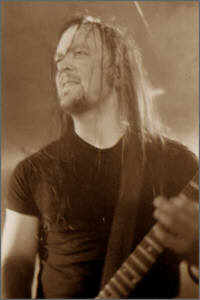 You will find some elements from those albums, but I guess that the most accurate way to describe the new album is "Norwegian Native Art" with a darker approach. It is always hard to tell how an album will turn out before we’ve recorded it, but based on my impression from the rehearsals, I’ll say that this will be our most special album to date.

The apparent falling through of Native North Records is a shame. Could you tell me a bit about the details of that, if possible?

It just didn’t work out. Music suddenly became business instead of art, and that was something we definitely didn’t feel comfortable with. So giving up the label was the right thing to do.

No more Native North Records means no more label for Einherjer. Is that correct? Or do you have someone in mind for the next Einherjer release?

True! But we are currently negotiating with several labels, so I wouldn’t worry too much.

'Regicide' was a very interesting track from "Norwegian Native Art"; will we ever see a further exploration of themes running on that song, ie female vocals, cleaner/harmonic sections?

Probably not... [laughs]. 'Regicide' is a good song, but I think it has done its purpose. I don’t find it necessary to explore such "smoothness" any further. 'Regicide' was the final chapter of the trilogy ('Howl Raven Come', 'Draconian Umpire' & 'Regicide') so the story made the song. It had to be a slow song.

Apart from yourselves and a few others, the Viking metal scene seems to be a little underdone. Who do you consider the 'cream of the crop' in Viking metal?

I’m actually not that into Viking metal. I’m obviously into Einherjer, but apart from ourselves I’m not that updated. The early stuff from Enslaved is great. Their best album is definitely "Frost".

What does it take to be a Viking metal band? Lyrics, choirs, etc, etc? Could an Australian heavy metal band play Viking metal if they had the right ingredients or does one need to hail from Scandinavia?

Everybody can form a Viking metal band, but I find it hard to believe that a band with a different cultural heritage manage to pull it off in a convincing way. It is one of those ridiculous "it’s not something you become, it’s something you are"... It probably sounds stupid, but that’s the way I see it... 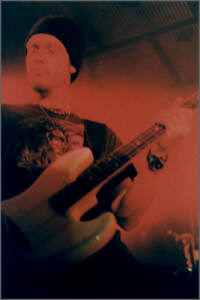 2000 was when "Norwegian Native Art" was released; it has certainly been a while between drinks. Got any idea in all the realms of possibility when the next Einherjer album will adorn records stores globally?

Yes, I know. Time passes quickly. It’s really hard to say when the album will be released. As I’ve already mentioned, we are currently working with various labels so we just have to wait and see. We are not signing any deal that we’re not 100% happy with.

Even though I am working on the assumptions that you are toiling away at a new album, do you have anything solid penned down? Album/song titles etc, etc?

The working title of the album is "Ethics of the Spear", but I reckon that will change before the release. Song titles include ‘The Eternally Damned’, ‘Dead Knight’s Rite’ and ‘Ware Her Venom’, but all titles are subject to change.

Much live shots I have seen of Einherjer are that you are covered in a blood like substance. What is the significance of this? Does it help convey the mood you try to create on stage?

A live show is not just about the music. It is the whole package. The blood is a very important part of our visual image. It is beyond any doubt that the blood, the make up and the costumes make it easier for us to do a convincing performance. It is easier for us to enter our roles as performers, and it is easier for the audience to catch the atmosphere we are trying to create.

In closing, I would like to thank you, Frode for doing this interview for all who read at www.metalbite.com. Good luck with the future, and I can’t wait for the new album (whenever that may be) and hopefully we can have the chance to chat again.

For latest news and updates regarding Einherjer, check out www.einherjer.com.