Culper Ring is a band that has risen out of the ashes of a project that started around 1997. The band consists of Steve Von Till (Neurosis), Mason Jones (Subarachnoid Space) and Kris Force (Amber Asylum). When they rejoined in 2001, the three original members created what is their debut, "355," out of what they originally had put together in 1997. The result album full of mood altering soundscapes and experimentalism rarely tampered with. Multi-talented musician Kris Force took the time to answer the following questions that I had pertaining to the mysterious Culper Ring, their latest album "355," and other questions related to the band. 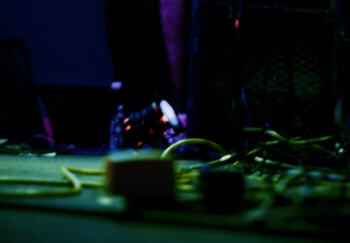 To begin, I really thought "355" was an excellent record, so I'd like to say nice work. I enjoyed it. If you would, please give us a little bit of the history of the Culper Ring project, such as who is involved, how it came about, etc, etc...

Culper Ring is a studio project created by myself, Steve Von Till and Mason Jones. We are friends sometimes playing on each others projects, etc, etc... Sharing the same community. Back in 1997, Steve, Mason and I recorded some improve and noise sessions in my home studio on a Tascam T38 reel to reel 1/2 inch machine. We were going to just see what happened, but the unspoken goal was to make a release. The tapes sat on the shelf and collected dust for 5 years. Steve, after establishing Neurot recordings suggested that we revisit the tapes and see if there was any good material. We mixed them and decided that there was some good material but it needed some melodic variation. W set up another session for recording. Then all the material was dumped into proTools where the real magic began. The elements were re-purposed and shifted and augmented with my sound FX library. There is one cameo line performed by Jackie Gratz on cello from an Amber Asylum recording.

For you what is the purpose of Culper Ring?

I think I can speak for everyone and say it was for the love of it. No one had a great ambition to start a band or even produce a second body of work - at least no one has mentioned it. We are all very busy. We are all fairly accomplished musicians and producers. The actual production time of this CD release, although spread out over several years, was incredibly efficient.

Culper Ring is more properly defined, in my opinion, as more of a musical experience than something you'd just put on and listen to casually. How do you guys go about producing something that is so driven by atmosphere and emotion, including electronics and soundscapes?

It's a very intuitive process with a multidimensional approach. There are many elements to consider. One is not limited to expressing with a single timbre or voice. You are not writing riffs and rhythms in A parts or B parts with a bridge. You have the journey through time that has a beginning and an end and can be colored and textured with variant sound elements and spatial dimensions. The vernacular of sound and sound design comes into play. The process has an unfolding quality. I find it very satisfying. I approach all of my commercial work the same way.

In 1997 when you, Steve Von Till (Neurosis), and Mason Jones (Subarchnoid Space) first gathered together and produced what is the original material for Culper Ring, why did the music that was produced at that time not formulate into something more serious? What caused you three to return to the material?

It was largely due to Steve's initiation. He's in the business of releasing titles and he's always looking for new opportunities. Honestly, I am sitting on so many damn recordings that I had completely forgotten about these sessions.

How much of the original recordings were used in "355," and how were they used?

I'm not sure. I can't remember. But the original recordings were one 456 Gold 1/2 tape, which is only about 30 minutes, and the entire piece is only 40 or so minutes, give or take, so less than half of the original recordings. Only the best sections or the most variant made it to the release, which is entirely subjective of course. The first session was noisy and nasty, so it is basically all the weavings between the "songs" that you hear. It was then bounced to my pro-tool system where we augmented the mix with some assets from my vast library and voices. 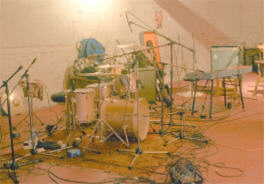 From what I understand the original recordings were much more disoriented, discordant, an un-musical. What caused the change when you returned to the project?

"Variation and mystery are the key to all great art and science" - Albert Einstein. We were not just presenting a form or style. The challenge for us was to create a journey. This was all unspoken at the time, but I'm certain we were in agreement.

Considering you not only play guitar but violin, what kind of musical background do you have?

I can pretty much play anything with a string, but I also sing and play piano and am a professional audio producer. Yeah. I'm amazing, [laughs]. I've studied performance instruments all through school and privately for 15 years. I'm thinking of picking up the trumpet just for fun. I'm classically trained on violin, voice and piano. I picked up guitar on my own. I play guitar out of necessity, when the piece needs a chord structure. Although I enjoy it, there are players out there who live breath and sleep guitar, and more adept than I. Lately, I've been using the piano in this role and really enjoying it. I love how I can just look and see all the parts graphically laid out for me. I've been an audio producer for over a decade for post-production film and video, radio and most currently video games. I'm working in the Sims 2 for PS2.

If at all, how does your involvement with Amber Asylum work into Culper Ring?

It doesn't. They're totally unrelated.

Where does the name Culper Ring come from and what does it mean? What about the title of the album, "355"?

Culper Ring is the United States first spy ring. The first CIA group and 355 was a woman secret agent, who I think ended up MIA. When President Bush started acting up, like a fucking idiot, which is an understatement of course, our children will be paying for his damages. I was following a conspiracy theory and researching the Skull and Bones society, which is a whole other Pandora's box, and somehow linked to the Culper Ring and suggested the name to the guys. Mason discovered the female agent MIA #. We agreed.

Have you, Steve, and Mason talked about producing more material for a second release, or is Culper Ring a one-time thing? What about playing live?

One thing at a time. No, we haven't talked about it or performing any of it. We are all really busy. I think would be quite challenging to perform this stuff since we all play so many parts. To accurately represent the sound we'd have to bring in other players.

Why is music important to you, and what does it mean?

It means universal service and it is how I heal or regenerate the core of my being down to my individual cells.

What are your interests musically? Do you enjoy the work by Steve Von Till, Mason Jones, and other things that Neurot Recordings represent?

My musical interests are vast and some for intrinsic value only. I really like a lot of 20th century classical, some indie rock, some metal, early recordings; pre-1940. I play on a gramophone, folk music and country, some ambient and experimental, but I am discriminating in this genre. There's lot of crap out there.

That is all the questions I have for you. I appreciate your time and thank you for answering them. Is there anything you'd like to say?