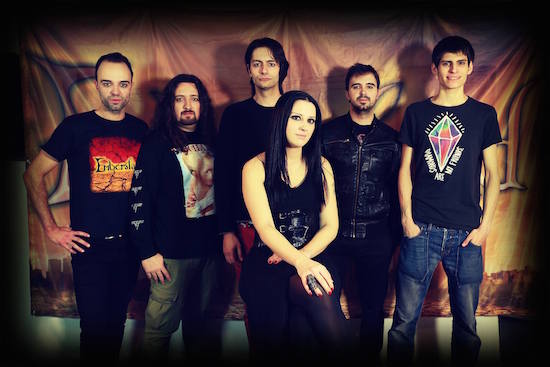 What are some of the biggest musical influences, for both you personally and Embersland?

I should say my favorite bands like Symphony X, Royal Hunt, Nightwish, Children of Bodom, Porcupine Tree, Europe and many others influenced me when I started writing music, and this different kind of styles has been mixed and was born Embersland!

Tell me about your musical background, what drew you to want to play music?

When at school I saw some friends learning how to play guitar and that was the beginning for me, I remember telling to my dad about learning how to play guitar cause he was playing when he was young, I started playing for fun rock versions for a while and first song I wrote was sunrise part 1, and after this I thought, hey you should make a band with friends and start writing more songs, and then was the beginning of Embersland with Jimmy playing guitar, Will the bass and me on drums while we were searching for drummer and keyboard players!

Originally, you were a band with only male vocals. What inspired the decision to add female vocals into your sound?

The need to go further, to explore new kind of songs, and to have more variety and quality in our songs was the reason, the important for Embersland music is not staying always making the same kind of songs as the most part of bands, we want that each new album got some different styles and variety in the songs, and with May we did something different than in first album.

What is your favorite thing about having a three vocalist attack, what advantages does it bring musically?

No doubt the combination of 3 vocalists and 4 kind of voices cause Will is making lows and growls, give us a wide range of variety that is really important for us, trying always to have our own personality as a band and not copying any band, it‘s really difficult to have an own sound in 2015, but I think we are getting it step by step!

I notice a wide range in keyboard sounds Embersland does, what is your favorite type of mood to set with keyboard melodies?

I like to use lots of different sounds in keyboards cause that gives again more variety and it s more fun for playing too, and maybe my favorite sound is church organ! In our third album I’ll have more time to investigate more kind of sounds cause there will be new styles in the music of Embersland like thrash metal and folk metal too!

What goes into being a great keyboard player, and what advice would you give to an aspiring keyboardist?

I’m not! Hahaha I just started playing 2 years ago when Luana left the band after releasing our first album, it's really complicated in Spain to find good keyboards players that wants to play metal and I decided start learning and the same time that May joined us and I didn’t have to sing all the time.

My favorite would be Tuomas Holopainen and Janne Wirman cause they show a variety of sounds that I like.

What are your favorite lyrical themes that you include in your music, messages that you particularly like to get across?

I’m not interested in lyrics really, when I write lyrics it’s like to make therapy, I put all my shits outside and then forget it haha, if I can help someone with my lyrics that’s great but for me the most important is music and melodies, if I want to read good lyrics better to get a book of poetry!

I found 'Sunrise (Part II)' to be an inspiring song, bringing a 'carry on through tough times, good things lie ahead' feel. Is there an Embersland song you find particularly inspiring?

What can I say? I like all the songs a lot, are my babies!! Haha but if I have to choose 'Sunrise (Part I and Part II)' it's the best definition of Embersland music, 18 minutes of metal, changes, different tempos, soft moments, rage, melodies, lots of different voices and styles and 'Memories' has some special feeling for me and 'Where Are You' it s a ballad that I love it!

You have mentioned having a large following in Latin America, what about your music do you think particularly attracts fans from there?

Well I think they are more open to show you feedback and write to band, maybe in Europe people is listening our albums too but we don’t receive the same feedback from them!

In live performance, what is a key in being able to do both vocals and keyboards during the same live show?

To practice a lot! It’s complicated for me cause in live I turn crazy, and sometimes I need to move, to jump to the audience and don’t play some parts haha but this is part of the show, sometimes energy on stage is more important than playing all the time, this is my point of view!

I’m almost finishing the songs of third album! My mind never stop writing music, this time won’t have a long song and that allows us to record more songs, 10 or 11 songs, and at the same time we want to try to go out of Spain to play, cause here the scene is totally dead for metal… it would be a dream to go soon to America or Europe!