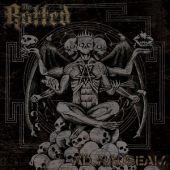 I was at a local show some time ago, and I remember a drummer for a local metal band (this band is now not in existence anymore) telling me of this amazing British Death Metal band with a Punk-ish name that had blew him away... and I was interested in checking it out as his enthusiasm was infectious as hell. True to form, the late night and too many beers drunk made me forget the name until the band resurfaced as one of a handful of CD’s to be reviewed. The Rotted is that band that had been mentioned.

Combining Old School Death Metal with their love of cocky Hardcore Punk, The Rotted explodes at you with this combination of melody and raw aggression that link the two seemingly opposite genres and meld them together to melt your face with its ferocious vulgarity balanced sound with masterful heaviness and mega talent. It seems they have created the perfect melding of Entombed, Napalm Death and Death with GBH and Cro-Mags with this odd feel of older school Thrash peppered into it in spots.

Each song lays out every last influence the band has in their arsenal, yet clearly this is not just a ‘Death Metal’ or ‘Crossover’ sort of band. The Rotted are a band that I would describe as a perfect example of Extreme Metal that uses many facets to make their music, but they also have a little more to offer as well, which makes the band a better commodity that the usual shit that is out there at this moment.

I don’t remember the name of the drummer that suggested I check out The Rotted. The only thing I can say is I owe ya a few pints of beer. This was very impressive and refreshing. Crossover Death Metal... Ahhh, this is what metal is about.